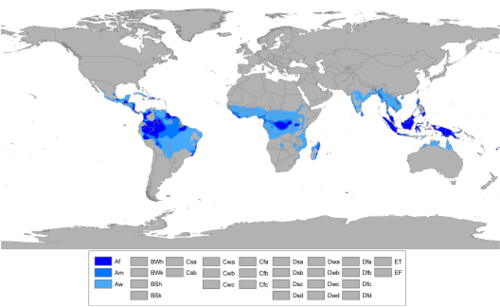 A tropical climate is a climate wich concerns countries between the tropics. In this climate all twelve months have mean temperatures of at least 18 °C/64 °F relatively constant throughout the year. The seasonal variations are dominated by the difference of precipitation : there are a wet season and a dry season.

It is possible to differentiate ;

Mountaintops within the tropics, e.g. Mount Kenya, can be cold and have snow. However, like lowlands in the tropics (and unlike cold winter temperate zone regions), there is little seasonal variation of temperature in alpine regions of the tropics.