From Vikidia, the encyclopedia for 8 to 13-year-old children that everybody can make better
(Redirected from Buffalo)
Jump to: navigation, search 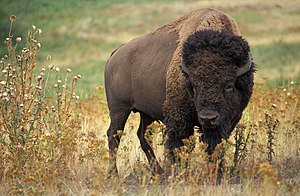 The American bison (scientific name : Bison bison) is a large mammal found in North America. It is also known as the American buffalo. Historically, this mammal lived on the grassy, open plains of the United States and Canada.

Today, bisons are found in National Parks and preserves in the U.S. Here, they are protected. They have regained some of their numbers lost in the nineteenth century through careful management.