From Vikidia, the encyclopedia for 8 to 13-year-old children that everybody can make better
(Redirected from Cape Verde)
Jump to: navigation, search

The Republic of Cape Verde, or Cabo Verde is a country consisting of an archipelago of volcanic origin for the west coast of Africa in Northern Atlantic Ocean. 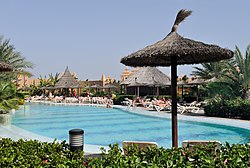 A resort in Cabo Verde

Ships on their way from Europe to all corners of the world who landed here beat water, poultry, and vegetables. In return gave the sailors to the Cape Verdeans usually non-articles such as pipes, tobacco but also clothing. This is evidenced by the travelogues of the South Dutch traveler Jan Frans Michel. His Chronicles are an important source in connection with the history of this country. In 1752 he was in transit to China and spent 11 days in Cape Verde. Also, the British pirate Woodes Rogers reported extensively about the State of the country in the beginning of the 18th century.

On 5 July 1975 Cape Verde was eventually independent of Portugal; the socialist Aristides Pereira became the first president. He was twice re-elected before the country got a multiparty system in 1990. Pereira was succeeded by the Democrat António Mascarenhas Monteiro, who in turn was succeeded in 2001 by Pedro Pires. The current president is Jorge Carlos Fonseca.

According to the United Nations development program in Cape Verde, 20.6% of the population lives on less than US $1.25 per day. The CIA World Factbook estimated that in 2000 30% of the population lived below the poverty line. This makes Cape Verde after Sierra Leone the poorest country in Africa. However, one looks to the gross national product per capita, we see a more favorable image. With a GDP of $3,700 per head, Cape Verde comes from the 161st place of 230 countries.

Cape Verde is one of the poorest countries in the world. The unemployment rate among the working population is approximately 25%; as many have too little work. By the great drought went many picks lost. With food, imports consumed one valuable currency. To obtain foreign currency is Cape Verde depending on the emigrant's overseas life and of development aid. Displays large employment programs funded: reforestation, making terraces of the for agricultural mountain slopes and road construction Although almost 50% of the population is employed in agriculture, the chosen sector but for 12% of the gross national product (GNP). Cape Verde would in the long term, its dependence on agriculture by focusing more on the fishing, which develops favorably, and especially on the service and on the specialized industry. In 1989, a law was adopted, that investments in export products and thus encourages the creation of jobs, as well as in a decade-long tax exemption, a duty-free import and export and in free profit transfers. For energy is one depending on imported petroleum and by-products. There is a possibility for hydro-electricity. The mining and manufacturing are limited to the extraction of salt and volcanic material, and a canning factory. The banking system, which surprisingly works efficiently, is further extended.

The central bank is the Banco de Cabo Verde, which is also the commercial bank. On Sal is an international airport. Portugal is both for the import (foods and transport equipment) as for export (fish and canned fish) by far the most important trading partner.