Savanna in March in Benin

The savanna or savannah is a type of biome that exist in tropical and subtropical regions. There are tall and closely grasses and scaterred bushes and trees. In the dry season grasses fade. But there is lots of grasses that can regrow from the roots in the wet season.

In North America, under a temperate climate, if there are fewer trees savanna is named tall grass prairies that have scattered trees, typically oaks.

In Brazil savanna is named cerrado ; in Spanih America, the name is llanos. 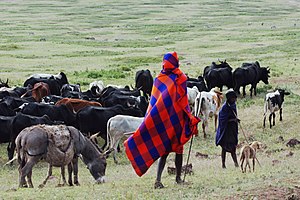 Herding in Tanzania. Photography taken in May

In Africa, before the beginning of the wet season, for making agriculture cultivators burn the faded grasses . Some weeks later, when it rains they put the seeds into the cold ashes.

In Western Africa the Fulani herd cows,goats and sheep. In Eastern Africa, the Maasai do the same.

Flora of the savanna[edit | edit source]

Fauna of the savanna[edit | edit source] 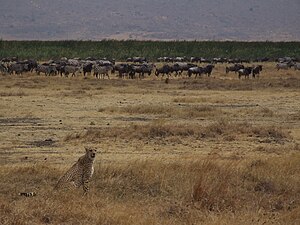 Wild life in the savanna Tanzania. Photography taken in September

Savanna is a good type of vegetation for wild herbivores, like zebra, antelope and their predators like lion or jaguar.