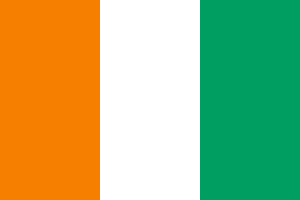 Flag of the Ivory Coast

Côte d'Ivoire, also known as Ivory Coast, is a country in West Africa with more than 22 millions inhabitants.

The official language of Côte d'Ivoire is French, with several other languages spoken across the country such as Dioula, Baoulé, Dan and others.

Côte d'Ivoire is roughly shaped as a square. Its overall land relief corresponds to a plateau with a slight slope from 500 meters elevation in the north to sea level in the south.

There is also the Cavalla River which materialises the western border of Côte d'Ivoire with Liberia.

Its capital city is Yamoussoukro, a small city of about 200,000 inhabitants, that lies more or less in the centre of the country. It is famous for its basilica, the largest church in the world.

With about 4.5 millions inhabitants, Abidjan is by far the largest city in Côte d'Ivoire, and even the third-largest French-speaking city in the world. It lies in the centre south of the country, only separated from the Gulf of Guinea by a lagoon.

Côte d'Ivoire exports a lot of cocoa beans and butter, which count for about a third of the total exported value, with petroleum being a distant second.

Its main ports today are Grand-Bassam and San Pedro.