Benin is a small country in Western Africa. It was called Republic of Dahomey from 1958 to 1975, and was a colony of France before (French Dahomey).

The name Benin comes from the Bight of Benin, itself coming from the Benin kingdom.

Benin is a small country, eight times smaller than Nigeria but about twice as big as Togo.

It has a population of more than 10 million people living mostly in cities located near the Bight of Benin such as Cotonou, Abomey or Porto Novo (the capital of the country).

It is a poor country, one of the poorest of the world.

The location of Benin.

The country shares its borders with four countries: Togo, Burkina Faso, Niger and Nigeria. Its southern coast belongs to the Bight of Benin.

Benin is situated in a tropical region. Only the region close to the sea has an equatorial climate and there is a semi-arid climate in the north-east.

The rivers in Benin are wild rivers. 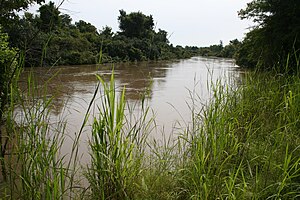 There are a lot of forests, national parks in Benin, especially in north (the south is more urban, and most of the cities are more next to the sea (Porto Novo or Cotonou).

The two most important national parks in Benin are: 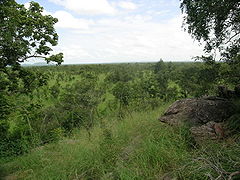 There are many forests in Benin. These are the most important ones (coming from North and going to the sea):

There are 12 departments in Benin:

Each department is administered by a prefect.

The capital of Benin is Porto Novo. It is situated near the sea.

The largest and most inhabited city is Cotonou. More than 800 thousand people live there. It is the economic center of Benin.

Here is the list of the cities in Benin (the ten most inhabited ones are in bold):[2]

The official language of Benin is French.

There are also lots of other languages, such as Peul, Yoruba, Fon,...

Benin is the 41th most multilingual country in the world, before France and after UK.[3]

Benin people often eat rice, corn (in southern Benin), tomatoes, beans and tropical fruits such as pineapples, kiwi, bananas, oranges,... In Benin, you also eat fufu, a sort of dough made out of flour.

There are a lot of specialty foods from Benin, for example Wagasi cheese (made by the Fulani people in northern Benin), Acarajé, Moyo, Beye, Amiwo (red corn dough), Gari Dossi, Gari Pinnon, Féchouada (from Ouidah), but also red rice,...[4]

Benin is part of the African Union, the Community of Sahel-Saharan States, the West African Economic and Monetary Union and the Economic Community of West African States. It is also member of the United Nations and the World Trade Organization.