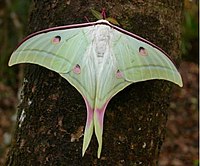 A colony of precious coral. 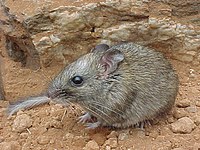 An animal is a living being. Animals are usually distinguished from plants, but they two are not the only kinds of living beings in the world, there are plenty of others, like fungi, or bacteria, for example.

There are many kinds of animals too: the ant, the bat and the reindeer, but also the octopus, the parakeet and the strange platypus are animals.

Most known animals are easy to distinguish, since they have legs, or wings, or fins, or something else (called a limb) they use to move : plants, for example, don't move. Some other animals, like snails, have no limb, but even though they are able to move.

But, if many animals move, not all do: some, as the coral, or the oyster, for example, are settled on a stand, and stay here all there life : they are animals anyway.

There are so many animals in the world, that it is hard to find a things in common between them all, but there are some... Some have scales, or fur, some have fins, or wings, some live in the water, or on the ground, but all have... a mouth: you can be sure that every animal has a mouth of any sort, and anything that has a mouth is an animal. Yes, that means that you are an animal too, since you have a mouth : the humans are one of the thousands of species in the world. More generally, the word animal is used, however, for any other animal except from human: it is a practical, and not a scientifical word.

A place where a number of different animals are kept, and breed, to be visited by people is called a zoo, from the Greek word zoo, meanings "animal". The humans uses to hunt (the hunting of fishes is called fishing), or to breed animals to eat them, or to exploit other thing from them, like there whoole (in the case of the sheep, for example)...

Some others animals are also bred as "friends": they then are called pets. Dogs and cats are among the most familiar pets, while iguanas or tarentulas are more odd ones.

There are so many different animals, that scientist have to tried to order them in different groups containing similar animals. Some of the most important are: