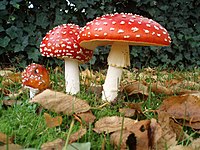 Mould staining on a peach.

A fungus is a living being that grow on the soil, or somewhere else. Fungi are often believe to be plants, because they grow, but in fact they are a different kind of living being, and recent scientific researches even show that they are closer relatives to animals than plants!

The fungi have a "body" (the mycellium) made of a tangle of threads (the hyphae). In most of cases, the mycellium is hidden. Many of them (among which are the better known species) also have mushrooms, wich produce spore.

Some mushrooms are edible, while others are toxic: so one would have to be very careful when eating it.

Some fungi, however, don't make any mushrooms, and look more like a kind of stain: they are called mold.

Some others only have one cell—they only can be seen with a microscope, and are thus microorganisms—these are the yeasts.