From Vikidia, the encyclopedia for 8 to 13-year-old children that everybody can make better
(Redirected from Bird)
Jump to: navigation, search

An European herring gull, in Germany. 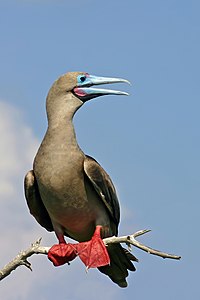 A male red-footed booby, in the Galápagos Islands. 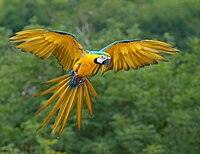 Birds (Latin: Aves) are a group of animals. There are 10.474 living species and are easily recognizable; apart from bats they are the only animals with wings and they are the only animals with feathers. Birds live in all kinds of habitats; some live in deserts, others live in really cold areas. Most of birds can fly, but some can't, and are fast runners (like the ostrich), or swift swimmers (like penguins) instead. Birds are really old – they used to live among dinosaurs. There are three theories about the relation between birds and dinosaurs:

Birds are easily recognizable because of their feathers and wings.

Birds are born in eggs. Most birds build a nest, in which they lay their eggs. A baby bird is called a chick, though this word is mainly used for baby chickens.

The birds eat many kinds of things, depending on their species : seabirds use to feed and fishes, squids, or other marine animals, while the raptors (like the eagle, the falcon or the owl) are carnivorous predators, which hunts other animals to eat their meat. Vultures usually eats carrions, but some, as the Egyptian vulture eat many kinds of other things, like eggs or bones... Many birds are vegetarian, and eat seeds, or fruits, like most of the songbirds. Some have a special shaped beak, in order to eat special things, like the red crossbill, with, as its name indicates, have a strange crossed beak, which allows it to eat fir seeds, or the hawfinch, with a very big and powerful beak it uses to break hard seeds.

Most birds have a beak especially shaped to catch and eat special food : the storks have an elongated beak, while the ducks' bill is flatted.