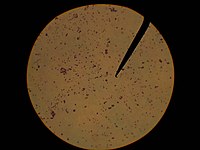 Tiny Staphylococcus epidermis, a bacteria that lives on the skin, seen at the microscope.

Bacteria are one of the three main groups of living beings (with the other being archaea and eucaryots). Bacteria have usually only one (or only a few) tiny cell, which makes them very little : bacteria can't be seen with just the eye, and will need a microscope : they are called microorganisms.

Bacteria are very abundant on every part of Earth : they live in water, on the soil, and even on and inside the other (greater) living beings : for example, your own body contains ten times more bacteria than human cells and, if put together, all the bacteria in your body would weigh about 1 kg!

Don't worry, most bacteria are harmless, and even better, many of them are very useful! Some of them protect us from diseases or help us to feed, etc.

Some bacteria are responsible of disease: they are rarer, but better known, this is why we often believe that bacteria are harmful.

(most of bacteria don't have a common name, just a scientific name)