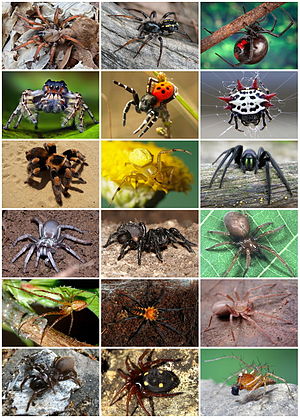 A variety of spiders

Spiders are small animals, looking a bit like insects, of which they are distant relatives. Spiders are easy to recognize from insects by the fact that the body is made of two (instead of three) parts, and that they bear four (and not three, as insects) pairs of legs. Spiders never have wings. They have 8 eyes, and 8 legs.

There are about 40,000 species of spiders in the world. All are poisonous, meat-eating predators, except one, called Bagheera kiplingi, which feeds on plants.

Spiders can produce silk. Many of them use this silk to build a web in which they catch their preys, usually small flying insects, such as flies, or wasps. 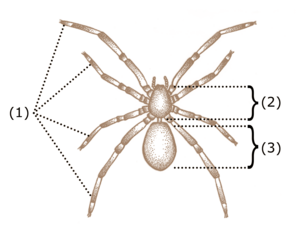 Spiders belong to the Arthropod group, the animals with an external, articulated skeleton (called the cuticle, or exoskeleton), just as the insects.

But, inside the arthropods group, insects are not the closest relatives to insects : scorpions, mites, and other relatives animals, are closer to the spiders, and share with them the fact of having four pairs of legs, and chelicerae on their mouth : Spiders, Scorpions, Mites and their relatives together form the group of Arachnida, wich is one of the type of Arthropod that can be found.

Despite they are arthropods, as spiders, insects do not belong to the arachnid group.