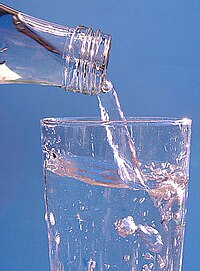 Water is a liquid. It is made from two molecules of hydrogen, and one molecule of oxygen. The chemical formula for water is written as H2O. Thus, water is a compound made up of oxygen and hydrogen. Water is clear, and usually in its purest form has no smell. Water will boil at 212 degrees Fahrenheit [F] (100 degrees Celsius [C]). Water will freeze 32 degrees F (0 degrees C). Water can be seen in oceans, rivers, and lakes. Sometimes water can be found underground.