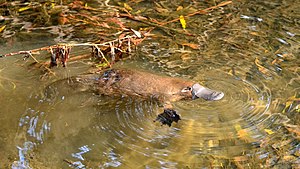 Platypus in the water

The platypus (scientific name : Ornithorhynchus anatinus) is of the family of monotremi and is an egg-laying mammal that lives in Australia and Tasmania. It is one of only five egg-laying mammalian species in the world. It is also venomous. The male has a spur on its foot that can cause pain to humans. The platypus is a duck-billed, beaver-tailed, otter-footed mammal which lives on the land and in the water. 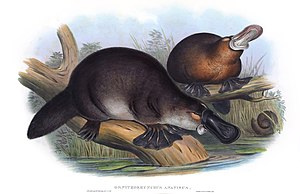 It eats annelid worms, insect larvae, freshwater shrimps, and freshwater yabby. The platypus needs to eat about 20% of its own weight each day. It spends about 12 hours every day looking for food. Before giving birth, the female builds a burrow about 12 inches above the water level. The male takes no role in raising the young. After mating, he goes to his own burrow. The female lines her burrow with dead leaves and other plant material. The female lacks teats and excretes milk through her skin. The newborns lick it from her skin.