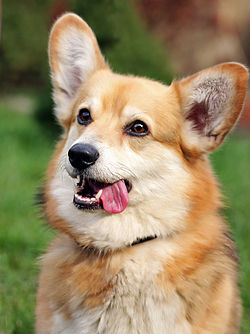 A dog (Scientific name: Canis lupus familiaris) is a domestic animal. Dogs have descended from wolves. Many people keep dogs in their homes as pets. Dogs have been bred to do certain jobs such as rounding up sheep on a farm or ranch. Dogs are members of fire-fighting teams and police squads. Some dogs became movie and television stars in the past like Lassie and Rin Tin Tin.

Dogs have been called "man's best friend" because they can be loyal and like being around humans.

There are currently over 200 registered dog breeds. Some are extinct but nowadays, with the right resources and right dogs, many breeders are trying to bring them back. Some of the more known breeds are: the Golden Retriever, German Shepherd, Labrador, Dalmatian, Dachshund, Corgi, Border Collie and Chihuahua. Some nearly unknown breeds are: the Azawakh, Estrela Mountain Dog, Xoloitzcuintli, Chinook, Telomian, Catalburun and the Mudi.

There are hypoallergenic dogs as well, such as poodles, which will not cause an allergic reaction if a dog-allergic person is near, even if it is severe. Dogs have high prey drives. They will kill, if not trained otherwise, any small animals. Some larger dogs such as Irish Wolfhounds and Giant Schnauzers can also kill a fully grown reindeer.