Chordates are a large group that gathers many different animals, from aardvark to zyzomys.

Chordates are one of the great group (called a phylum of animals ; a chordate is an animal with a skeleton inside of its body, rather than outside (as the oyster's shell, or the crab's cuticle, for example).

This seems familiar to you, because you are a chordate yourself : the chordates groups gather some of the greatest, and most familiar species on Earth, including our own, the humans.

All chordate are characterized by a peculiar piece of skeleton called a notochord, that gives their name. Notochord is a rigid axis, that runs through the body, from head to tail. Other animals use to have a skeleton outside of their body, like a shell, that protect them from danger, like predators, for example. But the chordate's skeleton is rather placed inside the body, making it more stiff, and strong. Chordates use to have muscles connected to their inner skeleton, that allow them to move quickly.

The notochord is located in the back of the animal, and it sustains and protects the animal's nervous system : the spinal cord. There are three different groups of chordates : 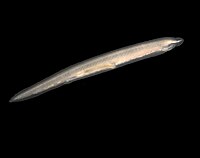