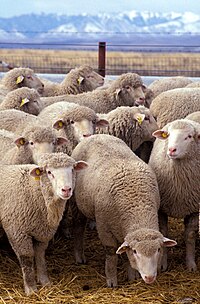 A flock of sheeps.

A sheep (scientific name : Ovis aries) is a mammal that bears a fleece of wool. The sheep is a close relative to the goat. It is a grazing herbivore, bred for its wool, its meat, and its milk. The fleece can be removed and used to produce articles of clothing and blankets, among other things.

The male is called a ram, the female, a yew, and the baby, a lamb.

Sheeps often (but not always, depending on the breeds) have coiled horns, especially for rams.

Sheep can be white, black, brownish or brownish-gray. It has four legs that end in hooves. Some breeds have horns and have a body covered with fleece, although other breeds exist that have hair.

This animal is a herbivore, in other words feeds on grass and other non-meat products. Their main source of food is bushes or shrubs, seeds, grass and legumes, such as alfalfa.

Sheep reproduce slowly as the females give birth to two lambs per litter and in general only have one litter per year. The male of this animal is called a ram and the young, lambs. Their gestation period, in other words, the time that the lamb remains in the womb of the mother sheep during pregnancy is five months.

Humans use sheep mainly for their wool, a well-used material in the textile industry. They also use their milk, which is usually produced in distinct dairies, and their meat, which is usually known as lamb The leather of this animal is also used to make clothes and other articles.

The first mammal cloned was a sheep. The result was the famous Dolly the Sheep, who lived from 1996 to 2003.