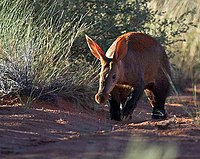 An aardvark, in South Africa.

The aardvark (scientific name : Orycteropus afer) is an animal that lives in South of Africa. It is a strange mammal, about the size of a dog. It has a long nose, long rabbit-like ears, and sharp claws. It feeds on ants, and other insects, but it is not a close relative to the anteaters.

Its name means "soil pig", in Afrikaans (a language spoken in South Africa). It is well known by the children, because it is the first word in the dictionary.