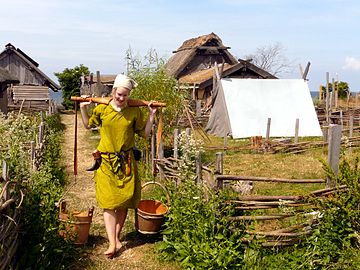 Reenactment of a farm life in the Middle Ages.

The Middle Ages are a time period in European history that stretched from the end of the Western Roman Empire (in the 5th century)[1] to the start of the Renaissance and the time Christopher Columbus discovered the New World in 1492. (at the end of the 15th century).

The 'Middle Ages' are called this because it is the time between the fall of Imperial Rome and the beginning of the Early modern Europe. This period of time is also known as the Medieval Age, the Dark Ages, or the Age of Faith (because of the rise of Christianity). When used narrowly, the term "Dark Ages" refer only to very early period, from 476 to 800 (when Charlemagne became king).

Across Europe, the fall of the Roman Empire, after the invasions of different barbarian tribes, devastated towns and cities and their inhabitants. The Dark Ages are given this name because during this period of time Europe was in disarray, and it was not fun to live there and since few could write, little is known about it. Much of the knowledge that the Romans used (science, technology, medicine, and literature) was lost. The Dark Ages period was marked by mass migrations, wars and plagues. This lasted some 300 years until the development of feudalism partly diminished the continuous violence. Emperor Charlemagne was crowned in 800, and he promoted order, education and civilization. Europe began slowly regain what was lost during those centuries.

The Gothic cathedral of Segovia in Castile (Spain)

Due to invasions and disorganized society, royal authority, too weak, was unable to properly protect the people. So the latter put themselves under the protection of a lord. In exchange, they worked for him, paying him taxes and giving him a portion of their harvests. This put in place a society divided between the owners of land (then the key to wealth) and those who worked it. Men were bound to each other by ties of loyalties granted more or less freely. Beginning in the 11th century, the development of towns allowed a new group (bourgeois artisans, merchants, and judicial and administrative officials) to gain importance, but at the same time, laborers in craft industries became more numerous.

The society was Christian and was organized in Western Europe through the Catholic Church, while in Eastern Europe, after the schism of 1054 it was the Orthodox churches that oversaw the population.

The attempted political unification of Europe by the Carolingians failed after the disintegration of the Frank empire in 843. While in the Germanic countries the Holy Roman Empire remained, to the west, very individualized countries progressively came into existence such as France and England. Dynastic kingdoms would compete for several centuries for these questions.

The economy remained largely tied to agricultural production. Agriculture experienced significant change beginning in the 12th century, with practically none in the 10th century. The 14th century was a period of great difficulty in Europe; agriculture declined but remained dominant in the 15th century.

Craft industry was embryonic in the cities at the beginning of the 11th century. But the urban growth that took off in the 12th century developed it. At the same time, major commerce resumed throughout continental Europe and the Mediterranean world. Wealthy merchants organized it.

Society was organised into categories: those who worked (labourers), those who fought (warriors), and those who prayed (priests). The workers (farmers and artisans in the countrysides) represented over 90% of the European population. In the 10th century, they were subject to the authority of the warriors (the lords). Gradually, either through purchase or by force, they get their freedom (the freedom of urban immigration from the villages to the cities). The peasant world became more unequal, with the greater part of the population living in difficulty from day to day, while a tiny minority, the farmers, was able to play and important role in the campaigns. The warriors (the nobility's army) would levy taxes on the agricultural production and the individual farmers are put in difficulty by the endless conflicts of the 14th century and the 15th century. A new nobility, made up of royal administrators, appeared in the 15th century.

In the Middle Ages, Europeans were all true believers. For the most part they were Christians, but divided after the schism of 1054 into Catholics in the west, center and south of Europe, and the Orthodox in the east and southeast.

Christians sought salvation of the soul above all else and feared the Last Judgment that would lead some to the eternal torment of Hell and others to eternal happiness in Paradise. For that, in the conduct of their ephemeral earthly life, they relied on the recommendations of the Church which were locally proclaimed by priests and popes. These monks were the gatekeepers for a population that can not read or write (except for a small minority), and can not have access to sacred books.

The churches were responsible for education, but basic for the population. They were the only ones that could help the sick and the poor. The Catholic Church imposed the Peace of God to reduce the damage associated with wars between the lords.

Efforts to reform the Catholic Church at the Council of Constance (1414-1418) failed. Believers proposed new ways to practice religion, such as John Wycliffe in England and Jan Hus in Bohemia (who was executed for this reason). Growing concern about salvation led some Catholics to question the validity of their religious beliefs and practices, particularly the heavy reliance on Works, on the veneration of saints and on spectacular expressions of penance. At the start of the 16th Century, this resulted in the birth of the Lutheran and Calvinist Churches, which separated from Rome.

Intellectual and artistic life, weakened by the Germanic invasions of the fifth century, began again with the Carolingian Renaissance in the ninth century. Transfer of knowledge, largely controlled by the Catholic church, continued in monasteries and later in universities. After Carolingian art, Romanesque and Gothic art developed covering Europe in monuments testifying to the faith of the people.

The Late Middle Ages were the last two centuries of the Middle Ages, from 1300 to 1492. During this period the gun changed war and aristocracy and feudalism became less important. States founded standing armies. Before, armies were only formed when there was a war. States only made their laws, money and identity the same in the entire country. Technology, economy and science developed. Cities were founded and existing cities grew larger and richer. France and England fought the Hundred Years War. The Grand Duchy of Moscow regained its independence from the Mongols just like the Chinese, and under the name "Russia" became the most important state in Eastern Europe.

In the 15th century, the Ottoman Turks conquered the Byzantine Empire. That event cut off the Silk Road, and the Europeans had to find new trade routes. In turn, the Muslims were driven off Spain. This event triggered the period called the Great Expeditions.

In the late Middle Ages the Frisians rebelled against the Habsburgians from 1515 until 1523. They were lead into battle by the legendary warriors and warlords Donia and Jelckama. They were eventually defeated and decapitated (beheaded) in Leeuwarden.

Byzantium: The other side of Rome[edit | edit source] 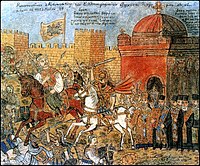 Meanwhile, the remains of Eastern Rome had become the Byzantine Empire, which was started by Roman emperor Constantine in 330, and likewise had a capital city named Constantinople. The Byzantine empire controlled Asia Minor, Southern Spain, Northern Africa and sometimes southern Italy but its lands were slowly eaten away by enemies like the Turks and the Franks. As a walled city on a peninsula the city of Constantinople was extremely difficult to attack. The Byzantines were eventually destroyed by the Ottoman Turks, who seized Constantinople in 1453. They called the city by its present-day name, Istanbul. This event is sometimes called the end of the Middle Age.

Islam was founded in the early 7th century by the prophet Muhammad. Muslims believe that the Qur'an is God's ultimate revelation to mankind. Islam spread quickly along the major trade routes of the old world, finding appeal with traders and travellers. The Islamic religion soon split; between the Sunni Muslims and the Shi'a. The Sunni religion is the majority (roughly 85% of Muslims belong to this sect), whereas most Shi'a live in modern-day Iran and Iraq. The Sunni-Shi'a split has been compared to the Catholic-Eastern Orthodox split of the Christian church much later in 1054.

Muslims quickly conquered the Christian countries of Iraq, Syria, Egypt, North Africa and Spain. The Christians were able to keep France and other European countries. Later Muslims took other countries such as Persia and India where they built the Mughal Empire. The Muslim Ottoman Empire eventually conquered parts of eastern Europe. The Muslims took hold of vast areas of land making them a superpower of the Middle Ages.

Christianity in Europe confronted Islam in the Middle East during the Crusades, in the Iberian Peninsula during the Reconquista. From the fifteenth century, Christianity, had to face the conquering Ottoman Turks advancing to Europe and Central Balkan.

During the Early Middle Ages, Muslims achieved what is remembered as a golden age of knowledge. During these times of strife in Europe, Muslim caliphs gathered the ancient texts of the great empires (Rome, Greece, Egypt) and attempted to re-integrate that knowledge. During this time a Persian Muslim helped develop progress in algebra. The golden age of Islam ended with the Turkoman invasions in the 11th century.