Miniature representing Charlemagne with his son Louis the Pious

Charlemagne, born in 742 and died 28 January 814 in Aachen, is the greatest representative of the Carolingian dynasty.

He is so called because of the nickname he was given, "Charles the Great" (in Latin, Carolus Magnus).

Charlemagne is the son of Pepin the Short, king of the Franks, and Bertrade of Laon (later nicknamed Bertha Broadfoot). At the death of his father, he began his reign as king of the Franks in 768. During his reign, he significantly expanded his kingdom, beginning with Italy: he became king of Lombards (a region in the north of Italy). He also conquered territories in what is now known as Germany.

Charlemagne located his capital in Aachen, in modern-day Germany. He had a sumptuous palace built there, with a chapel that can still be seen today. He was surrounded by poets, writers, and historians. He also built a school next to his palace where future clerks were educated, that is, the people who would run the administration of his kingdom. From 782 this School was partly run by Alcuin.

Charlemagne reigned over an immense empire. As such he decided to organize it through the grant of lands to faithful soldiers who would, in exchange, come to his aid in wars. This marked the beginning of feudalism. At the frontiers of his empire, the lords who received territory where charged with the defence of the empire. These were called " Marquis" because they were on the "Marches", that is the boundaries, of the empire.

In order to have his policies obeyed and carried out, Charlemagne regularly sent reliable men to go throughout the territory to implement his decisions and verify that the lords were behaving themselves. These envoys always travelled in pairs. They were called "Missi Dominici"(messengers of the Lord)

A coin (denier) from Charlemagne's time.

At Charlemagne's death, his son Louis the Pious (his nickname came from the fact that he was very religious) succeeded him. He had three sons, who fought each other for the right to rule over his empire after his death in 814. They ended up by being in agreement: The western part was West Francia, which became France (it was governed by Charles the Bald). The third brother, Lothair I, had a kingdom stretched out in length between the other two, Lotharingia, or Middle Francia, which went from Holland to northern Italy.

The peace agreement between Charlemagne's three grandsons was called the "Treaty of Verdun." It was signed in 843. 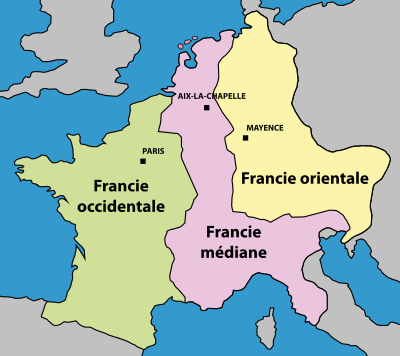 The division of Verdun in 843.
Retrieved from "https://en.vikidia.org/w/index.php?title=Charlemagne&oldid=119490"
Categories:
Hidden category: