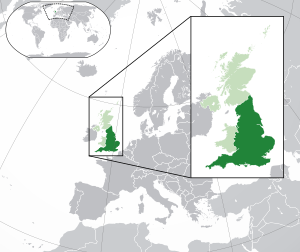 The location of England in the United Kingdom in Europe.

England is a part of the United Kingdom. It is the largest part and has the most inhabitants.

London is the largest city of England, and also the capital of the United Kingdom. Other important cities are Birmingham, Manchester, Liverpool and York.

In ancient times, England was part of the Roman Empire. The Romans left England ca. 400 Anno Domini. Shortly after, people from the continent went to England to conquer it. One of their colonies was called Anglia, from this comes the name England.