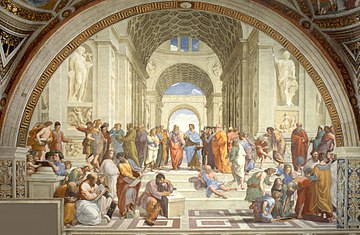 The School of Athens by Raphael. This Renaissance painting shows an imaginary scene from Ancient Greece, with many famous Greek philosophers, writers, artists and mathematicians. Raphael has used the faces of lots of famous people from his own time. He has used Leonardo da Vinci as his model for Plato, the philosopher with the white beard in the centre.

The Renaissance is a period in the history of Europe beginning in about 1400, and following the Middle Ages.

Renaissance has its origins in Italy in the fourteenth century, then in Germany in the fifteenth century and finally throughout Europe in the sixteenth century. An important date is 1453, the discovery of movable type used in printing by Gutenberg. This has led to a better distribution of knowledge in Europe: people could more easily print books in large quantities.

Causes of the Renaissance[edit | edit source]

In the Middle Ages, there were very few books. The books that existed nearly all belonged to churches, or universities, or to the upper class. They were written by hand and often had beautiful hand-painted pictures. They were so expensive that most people could not afford them.

Most books at that time were written in Latin, the language of the Ancient Romans that was used in the Catholic Church and only understood by priests and well-educated people.

In science, different texts of Arab civilisations were translated into Latin. Some of these texts were written by Greeks in ancient times, as Euclid's Elements. This translation has allowed Europeans to focus again on sciences.

During the Renaissance, there were many famous artists, many writers and many philosophers. Many people studied mathematics and different sciences. A person who is clever at a great number of things is sometimes called a "Renaissance man". Leonardo da Vinci, who was a painter, a scientist, a musician and a philosopher, is the most famous Renaissance Man. 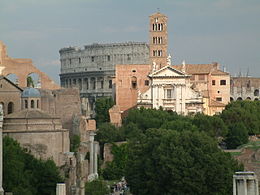 This picture shows the mixture of architecture in Rome. At the back is the huge wall of the ancient sports arena, the Colosseum. Near it is a church tower from about 1100 in the Middle Ages. The white front of the church of St. Francesca is from the 1600s. The columns and broken walls are all from Ancient Roman buildings. The round building to the left is now a church but was an ancient temple.

The time of Ancient Greece and Rome, when there were many philosophers, writers, painters, sculptors, architects and mathematicians was seen by people as a Golden Age, a time when things were beautiful, well-organised and well-run. This time had lasted from about 400 BC to about 400 AD.

In the year 1400, in the city of Rome, people could wander around looking up at the ruins of a city that had once been great. Inside the walls that had been smashed in 410 AD were the remains of huge temples, sports arenas, public baths, apartment blocks and palaces. Nearly all of them were ruined and could not be used. Nearly all of them were half-buried in dirt. A lot of them were pulled down to use as building stone. But they showed people what great things could be done. Among the ruins of this once-great city, the people of Rome lived in cottages. They still went to church in the huge churches (basilicas) built by the first Christian Emperor, Constantine the Great, in the 4th century. They still held market day in the Ancient Roman market place of Campo dei Fiori ("Field of Flowers").

The city of Florence. Apart from the dome at San Lorenzo's in the centre of the picture, this view has not changed very much since the 1400s.

One day in 1402, into the middle of Rome, came a young man called Filippo Brunelleschi and a teenage boy called Donatello. They were fascinated by everything that they saw. They measured ancient ruined buildings, they drew things and they dug around for weeks looking for bits of broken statues and painted pottery that they could stick together. They were probably the world's first archaeologists. By the time they went back home to Florence, they knew more about Ancient Roman architecture and sculpture than anyone had known for about a thousand years. Brunelleschi became a very famous architect and Donatello became a very famous sculptor. They both used the ideas that they had, when they were studying the remains of ancient Rome.

The city of Florence is really where the Renaissance began. In those days, Italy was not one single country. It was lots of little states, all governed in different ways and all fighting or making allies with each other all the time.

Rome was politically powerful, because Rome had the Pope, the person in control of the Roman Catholic Church. Because of his very great importance as a spiritual leader, most people and most cities did not want to argue with the Pope, whichever Pope he might be. Because a new pope was elected when the old one died, everyone who was rich and powerful was always hoping it might be a member of their family. It was always a good idea to have several young men in the family trained as priests, just in case. It was also a good idea to be good friends with other rich families. One way to do this was to have lots of daughters and get them to marry rich powerful men from different cities. This was the way that politics worked.

The power of Florence was not founded on a strong army, on a strong fortress or a good position to control trade. It was founded on banking. The cleverness in business of one single family was very important in making Florence powerful and the centre of Renaissance learning. The family were called the Medici. 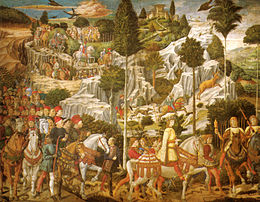 The Medici family had this painting done by Benozzo Gozzoli on the wall of the chapel in their palace. It shows members of the family as the Three Wise Men.

Florence and the Medici[edit | edit source]

Giovanni Bicci de' Medici, (1360-1429), was the first important member of the family. He invested his money very wisely and became rich. He and his son, Cosimo de' Medici, (1389-1464), began the Medici Banking Company, which did so well that they soon had branches of the bank in large cities all over Europe, including London and Paris. Giovanni Bicci and Cosimo were the richest men in Europe. Medici family was politically powerful family all of families from Florence. Florence already had an industry, the cloth industry. Florentine merchants (traders) traded with Lombard traders from the north of Italy. They bought English wool and Chinese silk to be woven into the most magnificent cloth in Europe at the riverside factories of Florence. Florence was perfectly sited for making cloth. A lot of water is needed to make cloth. Other towns nearby are high on the tops of hills, but Florence is in a wide valley, with the broad Arno River flowing through it. There was a harbor on the coast near Pisa. The Pisans were not very friendly towards Florence, so Florence took them over. Then the rich traders of Florence could have their own ships and did not have to worry about the Lombard traders who brought their goods across Europe and over the mountains on the backs of donkeys.

Cosimo de' Medici was a patriot and a patron. He was a "patriot" because he acted like a father to his city. He became part of the town council. They were a group of men called the "signorina" (the seniors or elders). Cosimo made laws that adjusted the taxes. Some of the rich people did not like this at all and left the city, making Cosimo more powerful. He took good care of industry, of trade and of farming, because Florence needed all these things. He particularly needed the loyalty of all the farms and villages, because a city in a valley is easy for an army to attack. Cosimo built public buildings and when he had a palace built for himself, he had long stone seats built along the walls for the poor and the elderly to sit on.

He was a patron because he supported the church, and lots of writers, artists, architects and students. He founded a "Platonic Academy" where students could study the works of Ancient Greek writers and talk about politics, religion and new ideas. The head of the Academy was a philosopher called Marsillio Ficino. Cosimo encouraged architects to design buildings in the style of Ancient Rome. He collected a huge library of books and gave them to the monastery of San Lorenzo to be used by students. When he wanted some quiet time, he went to friary, (which is like a monastery), Sant Marco's, where he encouraged one of the "brothers", Fra Angelico, to paint beautiful sacred pictures.

After the death of Cosimo, his grandson Lorenzo de' Medici became even more famous. He was called Lorenzo il Magnifico (the Magnificent). It was during the time of Lorenzo that some of the most famous artists in world history were alive in Florence, and worked for the Medici:- Botticelli, Michelangelo and Leonardo da Vinci.

List of important events of the Renaissance[edit | edit source]

The Birth of Venus' by Sandro Botticelli

The rebuilding of St. Peter's Basilica began in the Renaissance.

In Science and Technology[edit | edit source]

A map of the world by Abraham Ortelius, 1570