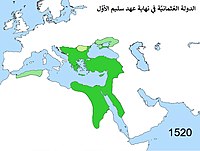 The Ottoman Empire lasted from 1299 to 1923. It was centered in Turkey and controlled the eastern and southern lands around the Mediterranean Sea. The empire was created by Ottoman Turks and was most powerful from around 1400 to 1600, when it controlled trade and politics in southeastern Europe, southwest Asia, and northern Africa. Suleiman the Magnificent was one of the most powerful rulers.

The empire was a collection of conquered countries. The Sultan sent governors to rule these countries or provinces, with titles such as Pasha or Bey. The most famous in the early 19th century was Muhammad Ali Pasha. In later years, the Ottoman Empire began to weaken. In the latter part of the 19th century became known as "the sick man of Europe".

In the early years of the empire, shahzadahs, who were the sons of the Sultan, used to be sent to Sanjaks (different parts of the empire) to have experience and to later govern. This was because they were candidates for the Sultanate and Caliphate.

After Ahmed this system changed. In the new system the Sultan would keep all his male relatives locked in a small apartment called a kafes where they would never be able to see the outside world, and would therefore be unable to take power from him. Often, a new Sultan would simply have his male relatives killed, a simpler solution since it removed competition for the Sultanate and prevented rebel movements. However, the women in his harem often sought greater status and influence, and the Sultan's mother might become the most powerful political force in the Empire, because each mother in the harem would try to make her own son the next Sultan, since they knew he would probably be killed if he was not.

The Sultans quickly lost their ability to govern far-away territories well, and all the peoples living in the Empire were soon governing themselves under their own laws. By its end, the Ottoman Empire grew so worn out and corrupt that it was ready to collapse.

Many places were vassal states to the empire rather than being directly ruled. These included Transylvania, Moldavia, Wallachia, (Romania), Caucasus (Georgia, Dagestan, and Chechnya. Their rulers received a degree of independence and autonomy from the Ottoman Empire. The price for this autonomy was more money (tax or tribute) paid to the Sultan.