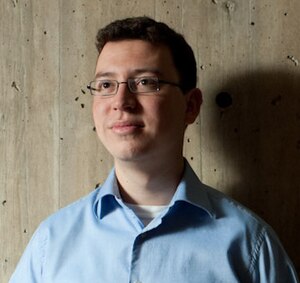 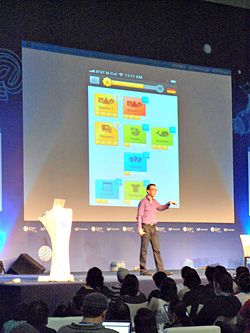 Luis von Ahn talking about Duolingo in a presentation

Duolingo is a website to learn languages for free. It was released on November 30, 2011. Currently the site offers courses in 28 languages. The most used are English, Spanish, French, Italian, Portuguese and Dutch. It also has an application for iOS, Android, Windows Phone and Chrome OS.

The project was initiated by the professor Luis von Ahn and the postgraduate student Severin Hacker. In the development was used principally the programing language Python[1], and with him participated Antonio Navas, Vicki Cheung, Marcel Uekermann, Brendan Meeder, Hector Villafuerte and Jose Fuentes.

To participate in the courses, is necessary create an account with an active and valid email address, where the user will receive the confirmation. Users are periodically sent reminders to practice the language. The user also can help to translate web pages and others documents.[2] Is important to have backing material such as dictionaries.

In addition to courses, Duolingo provides to its users a space where can apply the knowledge gained through text translation. People can only access this space through the website and not through phones applications.

On July 22 2004, Duolingo released Duolingo Test Center, a platform of an official English certification. This can be done in the website, iOS or Android, where the tests are supervised through camera and microphone. The tests require 20 minutes, cost $20 American dollars[3] and qualifies the student from a note of 0-10.

Increasingly Duolingo is used in classrooms. For example, in Costa Rica and Guatemala, Duolingo has been used in public schools as a pilot project carried out by the government. In January 2015, Duolingo launched a project entitled Duolingo for Schools, in order to provide teachers a control panel through which they can follow the progress of their students in a particular language. The board helps the teacher to understand the weaknesses and strengths of each student individually.[4]

Duolingo has 28 languages available for English speakers (Including 3 constructed languages), and 6 more currently in development.

"Hatching" means the course is still in development.

However, the Guarani and Catalan courses are only available for Spanish speakers, which has the most available courses for speakers of non-English languages, with 9.