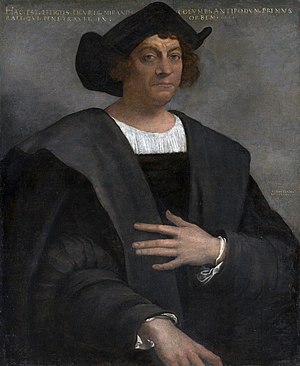 Christopher Columbus was a sailor and explorer of Italian origin. He was born in Genoa or in Savona by 1451, and died at Valladolid, Spain in 1506.

On 12 October 1492, he discovered unknown lands he believed to be a part of India. These lands would turn out to be islands of the New World.

He is credited for discovering the North American continent because the European continent didn't know of its existence. When Columbus arrived in the Americas there were already hundreds of thousands of people living there. Also, the Vikings settled in Canada and Greenland hundreds of years prior, but that knowledge was lost when the Viking culture and identity disappeared around the 11th century.

Washington Irving wrote a biography about Columbus in 1828. In it he falsely said that most people believed the Earth was flat and Columbus said it was round. The issue in the 1490s was not the shape of the Earth, but its size. Columbus thought the Earth was smaller than everyone else, and so he thought he could sail to India. Columbus was wrong and everyone else was right. Nobody knew about the Americas. Columbus was lucky and he didn't die at sea. The flat Earth myth became very popular between 1870 and 1920 and many still believe it today.

Columbus was the son of a weaver. His birthdate and birthplace are uncertain but historians believe he was born in Genoa before 31 October 1451.

Fascinated by journeys, he went to Portugal, married there, and studied the Geography of Claudius Ptolemy and Imago Mundi of Pierre d' Ailly. He made numerous but short sea journeys in the Atlantic Ocean.

Columbus proposed to reach India by crossing the Atlantic Ocean. The kings of Portugal and England refused him their financial help. He did succeed however in convincing queen Isabella of Castile to finance his expedition.

According to an agreement signed in April, 1492, Columbus would be ennobled and be granted the title of Great Admiral of the Ocean Sea. It was agreed that he would become the viceroy and the perpetual governor of the lands he would discover. It was also stated that he would receive 10% of all the wealth of the lands which he would govern in the name of Castile. 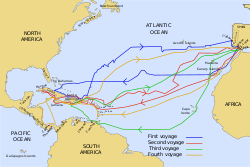 The four journeys of Columbus

With the invention of the printing press, Columbus was fascinated with the small Earth theory, the theory that the Earth was much smaller and sailing west would provide an easy trade route to India, but mathematicians had already known this was not true. Many at the time simply believed that if you sailed too far west, you would simply find nothing other than oceans, because the existence of the Americas was unknown to Europeans at the time, although the Vikings had settled in what is now Canada and Greenland hundreds of years prior.

Columbus left Palos, Andalusia on 3 August 1492. He sailed to the archipelago of the Canary Islands. On September 8, 1492, taking advantage of trade-winds, he launched his three ships westward on his first journey across the Atlantic. His ships were named the Niña, the Pinta, and the Santa Maria.

On 12 October, he landed on an island which the natives called Guanahani, possibly the island Watling of the Bahamas Archipelago. He also "discovered" Cuba and Hispaniola. He believed that he had landed in Asia, and referred to the Native Americans as "Indians". He returned to Spain on 15 March 1493 with natives and exotic birds, but without spices and without gold.

In 1493-1496, during his second journey, he "discovered" Dominica, Guadeloupe, Porto-Rico and Jamaica. As Viceroy governor of the bare lands, he cannot prevent the massacre of the natives by the Spanish colonists who were established on islands.

In 1498-1500, his third journey leads him to the mouth of the Orinoco River in present-day Venezuela in South America. He was accused of massacring the natives, and of importing African slaves. He is dismissed from his office, and sent back in Spain.

In 1502, he made his fourth and last journey to the New World, traveling along the coast of Honduras and the Isthmus of Darien.

He died in poverty in 1506 in Valladolid, Spain. In the modern New World, Columbus is revered as a hero. Schools, towns, streets, even cities, are named after him.