From Vikidia, the encyclopedia for 8 to 13-year-old children that everybody can make better
Jump to: navigation, search
For a complete list of units in the metric system, see International System of Units. 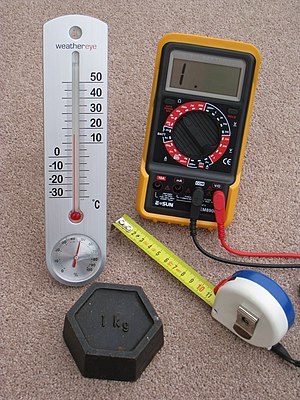 Four everyday measuring devices that have metric calibrations: a tape measure calibrated in centimetres, a thermometer calibrated in degrees Celsius, a kilogram weight, and an electrical multimeter that measures volts, amperes and ohms.

By 1875 many countries in Europe and in Latin America had changed to using the metric system. In 1875 seventeen countries signed the Metre Convention agreeing to share responsibility for defining and managing the metre and kilogram standards.[Note 1]

In 1960 the rules for the metric system was revised. The revised system was called the "International System of Units" (which is often written "SI" for short). The definition of SI also included rules for writing SI quantities. These rules are the same for all languages.

In the 1970s many people in the United Kingdom and the rest of the Commonwealth started using the metric system at their places of work. The United States is the only major country where the metric system is not in widespread use.

Road sign on a Chinese motorway close to Beijing. The sign uses the international symbol "km" for "kilometres". 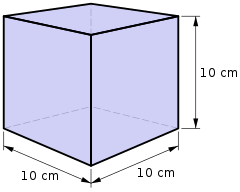 One litre has the same volume as the volume of a cube with edges of 10 cm (1 dm). One kilogram is about the mass of one litre of water at the melting point of ice.

A thermometer calibrated in degrees Celsius. Water freezes at 0°C and boils at 100°C.

The metric system is a decimal-based system of measurement. The system has units of measure for each quantity. The names of most units of measure in the metric system have two parts. One part is the unit name and the other part is the prefix. For example, in the name "centimetre", the word "centi" is the prefix and the word "metre" is the unit name. Sometimes, as with metre, litre and gram, there is no prefix.[1]

In the metric system, all units have a "symbol". Symbols are a shorthand way of writing the names of units. All the countries in the world use the same symbol for a unit, even though they might have different ways of writing out the unit name in full. For example[2]

In the metric system, length is measured in metres. The symbol for the metre is the letter "m". The metre was originally defined as being 1⁄10,000,000 of the distance between the North Pole and the Equator on the meridian that passed through Paris. In 1799, a platinum bar that was equal to this length was made and became the "prototype metre"[Note 3]

In the metric system, volume is measured in litres. The symbol for the litre is "L". In 1795 the French Government defined one litre as being the same volume as the volume of a cube which had sides that were 10 centimetres.[3]

In the metric system, mass is measured in grams. The symbol for the gram is the letter "g". In 1795 the French Government defined the gram as the mass of one cubic centimetre of water at the freezing point of ice.[3] This was difficult to measure, so in 1799 the French Government made a "prototype kilogram"[Note 3] (1000 grams) weight.

In the metric system, temperature is measured in celsius (or degrees Celsius). The symbol for celsius is "°C". Water freezes at "0°C" and boils at "100°C".

If the numbers are too big or too small, the metric system uses prefixes to make it easier to understand the numbers.[1]

The prefix kilo is used to show that a measurement is 1000 times as large of the base measurement:

There are a lot of other prefixes. Some of them are:

These tables will help you to estimate the size of different lengths or masses in the metric system. In these tables:

Some names in the metric system are spelt differently in British English and in American English.

Seal of the BIPM

In 1875 representatives from the governments of twenty different countries met in Paris to discuss weights and measures. Seventeen of the countries signed a treaty about weights and measures. The treaty was called the Metre Convention. The countries that signed were: Argentine Confederation, Austria-Hungary, Belgium, Brazil, Denmark, France, Germany, Italy, Peru, Portugal, Russia, Spain, Sweden and Norway, Switzerland, Turkey, United States and Venezuela.[13]:75–76 They agreed:[14][15][16]

In 1889 the copies of the kilogram and the metre were ready to be given to the different countries that signed the treaty.[16]

The United States Congress ratified the treaty in 1878.[18] The United Kingdom signed the treaty 1884.[19] Neither country passed laws making it compulsory to use the metric system.[20]

In 1921 the Metre Convention was extended to include all physical measurements including time, electricity and temperature.

In 1960 the BIPM published the "International System of Units" (or SI). SI clarified a number of areas of the metric system, particularly in science and in engineering. The BIPM also standardized the way in which SI was written making it the same for all languages.[21]

There are 16 US fluid ounces in a US pint but there are 20 imperial [UK] fluid ounces in an imperial pint. The US fluid ounce is larger than the imperial fluid ounce, but the imperial pint is larger than the US pint.[22] In the 1700s this type situation was common across Europe. Each country measured length, weight/mass and volume in its own way. Sometimes different countries or cities used the same name for different measurements. Sometimes different cities in the same country had different ways of measuring things. In 1789 there were a quarter of a million different units of weight and measure in France.[23]:2–3

During the French Revolution the French scientists decided that it would be better to have a new system of weights and measure. The system would be the same in all French provinces and cities. They also decided that it would easier if the new system used 10's instead of 12's, 16's or 20's. This is because people count in 10's. The new system became the official system of measurement in France in 1799.[24]:71–72 One of the French leaders, the Marquis de Condorcet declared that "[the metric system] is for all people for all time".[23]:1 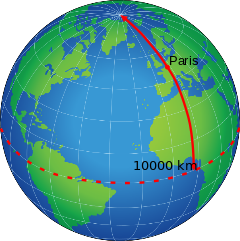 The metre was originally defined to be one ten millionth of the distance between the North Pole and the Equator through Paris.

They decided that the new system would be for everybody on earth and that the new unit of length would be called a "metre". They decided to there would be 10,000,000 metres between the North Pole and the equator. Between 1791 and 1798 two surveyors, Pierre Méchain and Jean-Baptiste Delambre, measured the distance from Dunkirk to Barcelona using old French units. They used the stars to measure the latitude of these cities. They used this information to work out that the length of the metre should 443.296 lignes.[Note 4] In 1798 the French scientists made a bar of platinum that was exactly one metre long. They stored this bar in the French archives. It was called the metre des archives. People who made one metre rulers were able to check that their rulers were the same length as the metre des archives. Other scientists made a kilogram weight from platinum which was also put in the archives. This weight was called the kilogram des archives.[23]:266

In 1799 the metric system was made compulsory in the region around Paris. This caused a lot of confusion because the police enforced the new measures but customers preferred the old ones. So shopkeepers had to have both. People became worried the new measures were used to cheat them. Politicians tried to educate and convince people to use metric, but the people rejected the metric system. In 1800 the government tried to make the system acceptable by changing the names of the units back to the simpler names used before metrication. For example, the decimetre, centimetre, and millimetre were renamed to palme (hand), doigt (finger) and trait (trace).[23]:270–275

In 1799 Napoleon became the leader of France. By 1812 he had conquered most of Europe. He introduced the metric system to the countries that he conquered. In 1815 he was defeated at the Battle of Waterloo. After Napoleon was defeated, most of the countries started using their old systems of measurement again.[25]

During this time, the metric system was still the official system of measurement in France. And it still had simplified unit names. But the French people continued to use the measures they were used to. The French government tried to persuade the people to convert. They mass-produced metric rulers, they tried to teach the people to use metric measures, and commanded the police to punish people who would not cooperate. Eventually the government stopped trying and withdrew the metric system.[23]:332–333

On 12 February 1812, France stopped using the metric system and started using a new system called mesures usuelles. The new system was based on many of the old pre-metric units. The old units were redefined to be round numbers or fractions of the withdrawn metric units. For example, the livre (pound) was reintroduced and changed from 489 grams to 500 grams. The toise was redefined as 2 metres. The toise contained 6 pied (feet), changed from 324.8 mm to Template:Fraction of a metre (333.33 mm). The pied had 12 pouces (inches) and the pouce had 12 lignes.[13][23]:334

In 1837 the metrication laws were revived in France. And in 1840, the system did become compulsory throughout France, almost 50 years after it was first introduced.[23]:451

Map showing the date of adoption of metric system. Red is for the oldest and green for the most recent. Black shows countries that have not adopted the metric system.

During the nineteenth century many small countries started cooperating with each other. In 1815 the Kingdom of the Netherlands was formed from seventeen small states. Each state had its own system of measurement. In 1820 they decided that it would be better if everybody used the metric system.[26]

In the same year, Italy was also formed from a large number of small states. Italy also decided to use the metric system rather than choosing one of the old systems of measurement.[26]

In 1975 the Metric Conversion Act started a formal metrication process. Metrication was to be voluntary. It was to be coordinated by the U.S. Metric Board. In 1988 the Omnibus Trade and Competitiveness Act said that metric units had to be used for all federal projects.[28] The Act did not apply to state projects. Some states demanded that metric units be used but other states did not. Some industries changed to using metric units but others did not. Soft drinks are sold in metric quantities. Milk is sold in customary units. Metric units are widely used in the design of motor cars.[29] Aircraft such as the Boeing 787 Dreamliner were designed using mainly customary units.[30]

Some people in the United States want to complete the change-over to the metric system. They say that it will make things easier for everybody.[31] Other people say that it will cost too much money.[32] Some people want to use the metric system because it will make it easier to export goods.[33] Other people say that metrication can only work if all fifty states metricate at the same time. This will not happen unless the Federal Government takes the lead.[34]

When the metrication Board was closed down in 1981 most of government and industry had changed to the metric system but a lot of everyday things like road signs had not been changed.[38] A survey taken in 2013 showed that metric units and imperial units were both widely used by British people in their private lives.[39]