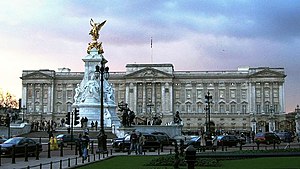 Buckingham Palace and the Victoria Memorial

Buckingham Palace is the official London residence and principal workplace of the British monarch. It is in the center of London, in the City of Westminster. The palace is a setting for state occasions and royal hospitality. It has been a focus for the British people at times of national rejoicing and crisis.

It was built by John Sheffield, 1st Duke of Buckingham and Normandy, in 1703 as a town house (a residence in London). It was bought by the British royal family in 1761, and became the official London home of the family in 1837. It is owned by the State.

Buckingham Palace has 775 rooms, and is one of the few working palaces in the world. Leading up to it is a ceremonial road called The Mall.

Buckingham palace is the London home of the Queen.