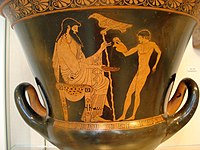 Zeus and his servant Ganymedes

Zeus is an ancient Greek god, the most powerful of all the gods and goddesses of Mt Olympus. His symbols are the thunderbolt, the bull, the eagle, and the oak tree. He established the Olympic Games. In ancient Rome, he was known as Jupiter.

Zeus was married to Hera, the Queen of Heaven and the goddess of marriage. He had several children by Hera including Hebe, Ares, and Hephaestus.

He had other children by other women, which infuriated Hera. The god Apollo and the goddess Artemis, for example, were his children by Leda, a mortal woman. Dionysus, the god of wine and the theater, was Zeus's son by the mortal woman, Semele. The hero Herakles was the son of Zeus and Alkmene, a mortal woman. There are many others.

Zeus had two brothers who shared the rule of men and the natural world. Hades was the Lord of the Underworld, and Poseidon was the Ruler of the Oceans. Both were infrequent visitors to Mt Olympus.