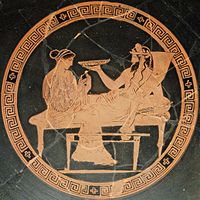 Hades and his wife Persephone

Hades is the Greek god of the underworld. He is the brother of Zeus and Poseidon. He has three sisters: Demeter, Hestia, and Hera. Hades' wife is Persephone. In time, he became the god of wealth, perhaps because precious metals came out of the ground.

Hades ruled over the souls of the dead. He never allowed any soul to leave the underworld. Herakles, Orpheus, Theseus, and other heroes descended into the underworld for various reasons, but did not like what they saw.

Hades was owned a Cap of Invisibility, a chariot drawn by four magnificent black horses, and a three-headed dog named Cerberus. This dog guarded the entrance to the underworld.