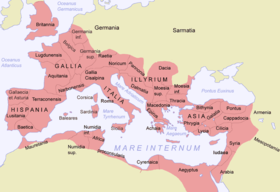 The Roman Empire at its greatest extent under Trajan in AD 117.

Ancient Rome is the name for a civilization which began as a small farming community in the 10th century BC Italy. It grew to become the largest empire in the ancient world.[1] It started as a monarchy, then became a republic, then an empire.

The Roman Empire was so big that there were problems ruling a territory which stretched from Britain to the Middle East. In 293 AD, Diocletian split the empire into two parts. A century later, in 395 AD, it was permanently split into the Western Roman Empire and the Eastern Roman Empire.

The Western Empire ended because of the Germanic tribe, the Visigoths in 476 AD. In the 5th century AD, the western part of the empire split up into different kingdoms. The eastern Roman Empire stayed together as the Byzantine Empire. The Byzantine Empire would be defeated by the Ottoman Empire in 1453.

For the main article, see Culture of ancient Rome

Roman culture spread to Western Europe and the area around the Mediterranean Sea. Its history still has a big influence on the world today. For example, Roman ideas about laws, government, art, literature, and language are important to European culture. The Roman language, Latin, slowly evolved becoming modern French, Spanish, Italian, and Romanian, and influenced many other languages like English.

Beginning with Emperor Nero in the first century AD, the Roman government did not like Christianity. At some points, people could be put to death because they were Christians. Under Emperor Diocletian, the persecution of Christians because the strongest. However, Christianity became an officially supported religion in the Roman Empire under Constantine I, who was the next Emperor. With the signing of the Edict of Milan in 313, it quickly became the biggest religion. All religions except Christianity were banned in 391 AD by an edict of Emperor Theodosius I.[2]

The Byzantines were threatened by the rise of Islam, whose followers took over the territories of Syria, Armenia and Egypt and soon threatened to take over Constantinople.[3][4] In the next century, the Arabs also captured southern Italy and Sicily.[5]

The Byzantines, however, managed to stop Islamic invader from moving further into their lands during the 8th century and, beginning in the 9th century, took parts of the conquered lands back over.[6] In 1000 AD, the Eastern Empire was at its largest point: Basileios II reconquered Bulgaria and Armenia, culture and trade flourished.[7] However, the expansion was suddenly stopped in 1071 at the Battle of Manzikert. This finally made the empire start becoming weaker. Several centuries of fighting and Turkic invasions ultimately made it possible for Emperor Alexius I Comnenus to send a call for help to the West in 1095.[3]

The West responded with the Crusades, eventually resulting in the Sack of Constantinople by participants in the Fourth Crusade. The conquest of Constantinople in 1204 split what little land remained in the Empire into new countries, the ultimate winner being Nicaea.[8] After the recapture of Constantinople by Imperial forces, the empire was little more than a Greek state confined to the Aegean coast. The Eastern Empire came to an end when Mehmed II conquered Constantinople on 29 May 1453.[9]