Herakles on an ancient Greek vase

Herakles is a character in Greek mythology. He is the god of heroes, athletes, and divine protector of humankind. He is credited with making Greece safe for all Greeks. He wore a lion skin over his shoulders, and carried a club of olive wood or a bow and arrows. He was known for his quick temper, which often resulted in disaster. He was one of the most popular gods of Ancient Greece. Many temples, altars, and statues were erected in his honor. He was known as Hercules in Ancient Rome.

Herakles strangles the snakes sent by Hera to his cradle

Herakles was part divine and part mortal. He was the son of Zeus, the god of the heavens, and Alkmene, a beautiful mortal woman. Herakles showed great strength and courage in his babyhood. He killed two large snakes in his cradle that Hera had sent to kill him. People admired him for his strength. As he grew into a teenager, they became afraid of this great strength and his unpredictable nature.

One day, Herakles was made insane through the scheming of Hera, the Queen of Heaven and the jealous wife of Zeus. Hera made Herakles kill his wife Megara and his children during his madness. To atone for this great crime, he was forced to perform 12 "Labors" (tasks) known as the Labors of Herakles. Hera hated Herakles because he was the bastard son of her husband, Zeus. The Labors she devised were nearly impossible to perform. She hoped Herakles would be killed trying, but Herakles finished the Labors successfully.

Hera devised the Labors, but Eurystheus, the King of Tyrins and Herakles' cousin, delivered them to the hero. Eurystheus was a great coward, and did not want Herakles near him or in his palace. Herakles hated serving such a timid, unmanly king. The exact order of the Labors is uncertain, but the list below follows the order of the Labours on the metopes of the Temple of Zeus at Olympia.

The First Labor: The Lion of Nemea 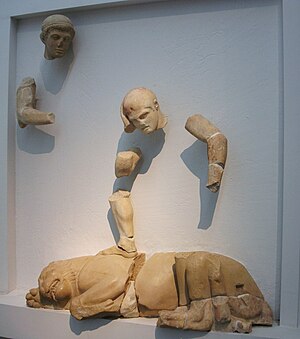 Herakles and the Nemean Lion

Herakles was ordered to kill the Nemean Lion. This fierce animal was terrorizing the people of Nemea. The lion's golden skin could not be pierced by weapons. Herakles strangled the animal, then returned to Tiryns. Eurystheus was disgusted with the lion's carcass, and put a large bronze jar underground. He would hide in this jar whenever Herakles was nearby. Herakles flayed the lion with one of its own claws. He wore the skin as a mantle and the lion's skull as a helmet. Euripides wrote in his play Herakles: "First he cleared the grove of Zeus of a lion, and put its skin upon his back, hiding his yellow hair in its fearful tawny gaping jaws." Zeus put the lion in the sky as the constellation Leo.

The Second Labor: The Hydra of Lerna 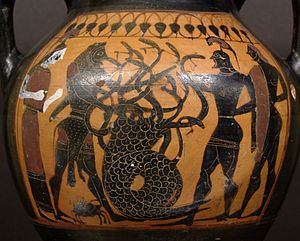 Left to right: Athena, Herakles, the Crab, the Hydra, Iolaos, and an unknown character (possibly Zeus) on an ancient Greece vase

Herakles was sent to kill the one hundred-headed Hydra of Lerna. This monster was terrorizing travelers on the roads near Lerna. It was nearly impossible to kill. Once a head was cut off, the Hydra would grow another one in its place. With the help of his companion Iolaos, Herakles found a way to kill the Hydra. He would cut off a head, and Iolaos would sear the wound with a torch. A crab crawled from a swamp to bite Herakles in the heel, but the hero crushed its shell. Herakles finally cut off all one hundred heads, including the immortal center head. He buried this head under a stone. Back in Tiryns, Eurystheus would not accept this Labor because Herakles had had the help of Iolaos. He thought of another Labor. Hera put the crab in the sky as a constellation.

The Third Labor: The Stymphalion Birds 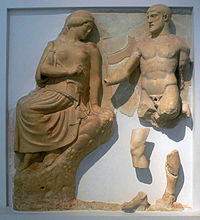 Athena and Herakles at Lake Stymphalos

The Third Labor sent Herakles to Arkadia where a flock of man-eating birds were terrorizing the countryside and polluting it with their poisonous dung. These birds had razor-sharp feathers of bronze that they launched at men and their animals. The birds were the pets of Ares, the god of war. Athena gave Herakles a rattle that, when shaken, frightened the birds away. Herakles killed many with his poisoned arrows. Herakles took a few of the dead birds back to Tiryns to document his adventure for Eurystheus.

The Fourth Labor: The Kretan Bull

The Kretan Bull rose from the sea. Poseidon, god of the sea, intended King Minos to sacrifice the bull, but it was so handsome that Minos kept it for himself. He sent it to mate with his cows, then sacrificed another bull to Poseidon. The god was angry and caused Minos' wife, Queen Pasiphaë, to develop a sexual desire for the animal. She mated with it and gave birth to a son. This son was the Minotaur, a monster with the head of a bull and the body of a man. The Kretan Bull went mad. Herakles captured it by throwing a rope about its head and about a leg. Some say he wrestled it, or stunned it with his club. Minos let Herakles take the bull to Greece. Eurystheus wanted to give the bull to Hera but she would not take it because Herakles had captured it. She let it go and it wandered about Greece. Theseus of Athens finally captured it and sacrificed it to Athena, or some say, Apollo. The bull had spent its days in Krete destroying crops and belching fire.

The Fifth Labor: The Golden Hind 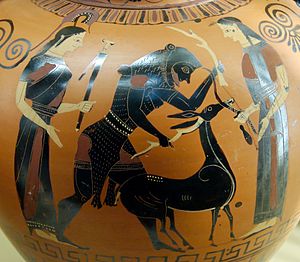 Herakles captures the Golden Hind, and breaks off one of its golden antlers. Athena (left) and Artemis (right) look on

Hera and Eurystheus realized Herakles could find a way to kill any fierce animal, so they devised a more difficult Labor. The two ordered him to capture the Golden Hind. This deer could outrun an arrow. When Artemis, the goddess of the hunt, was a child, she saw five female deer grazing near a river in Thessaly. Each was as large as a bull, each had hooves of bronze, and all had antlers of gold. She caught four of them, and used them to pull her chariot. The fifth escaped. Herakles hunted the fifth hind for a year. It took refuge on Mount Artemision. Herakles let fly an arrow that pinned the hind's front legs together without drawing blood. He put the hind on his shoulders and took her back to Tiryns. Some say Herakles used a net to capture the hind or captured her when she was asleep under a tree.

Herakles's death was caused by the centaur Nessus. This centaur sent the hero a poisoned shirt. Herakles put it on, and was in great pain. He was near death when the gods sent a heavenly chariot to carry him Mt Olympus. On Mt Olympus, his mortal part fell away. He was finally fully divine. He married Hebe, the goddess of youth and the daughter of Zeus and Hera. He became the gatekeeper on Mt Olympus.

Herakles is the subject of much ancient and modern art. He is the subject of an ancient Greek play by Euripides, an oratorio by George Frideric Handel, a classic cult movie of the 1950s starring Steve Reeves (Mr. Universe), and a television series.