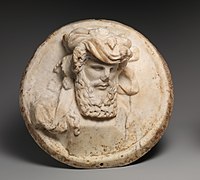 Dionysus was one of the most important Greek gods.

He ruled over plants, fruit, wine and extreme happiness.

According to myth, he was the son of Zeus and Semele.

In ancient Rome he was called Bacchus.

He could tell the future through a person called an oracle. His main oracle was in Thrace.

Parties called Dionysia were held to honor him. The songs or dithyrambs sung to him are seen as the start of drama in the West.