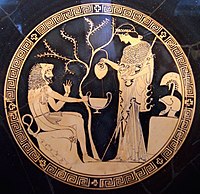 Athena was the Greek goddess of wisdom and military strategy. Her Roman counterpart was named Minerva. Athena was born from the mind of Zeus, and erupted from his head fully clothed and fully armed. She was chaste and had no lovers, consorts, or husbands. She had no children. The owl was her sacred bird. The Parthenon was built in her honor. She supported valiant heroes and men like Perseus, Herakles, and Odysseus.