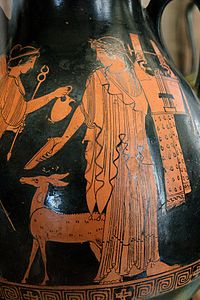 Apollo on a Greek vase painting

Apollo was the Greek god of sunlight, music, poetry, prophecy, and more. He was the son of Zeus and the mortal woman, Leto. His twin sister was Artemis, the goddess of the hunt. Apollo was thought the ideal youth in beauty and athletic ability. He carried a lyre.

Apollo was in love with many men and women. His most famous female lovers were Daphne, Cassandra, and Acantha, the spirit of the Ancanthus tree. His male lovers included Cyparissus, Admetus, and Hyacinth. When he accidentally killed Hyacinth, he created a flower in his honor from his blood.