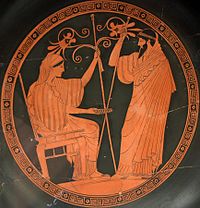 Hera (seated) and Prometheus on a Greek vase painting

Hera was an Ancient Greek goddess. She was Zeus's sister and wife, and also the Queen of Heaven. Her special concerns were women and marriage. The cow, lion and the peacock were sacred to her. In Rome, she was called Juno.

Hera could be a kind goddess, but she is more memorable for being cruel, vicious, and mean - especially to the children her husband got upon mortal women. She devise the Twelve Labors for Herakles, hoping they would kill him.