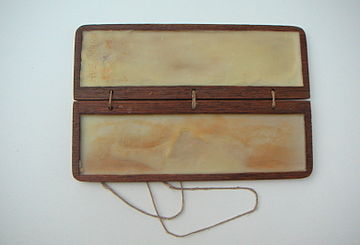 A wax tablet is a wood tablet covered with wax. It was used as a writing pad in the Roman Empire, and notably used the Roman schools instead of paper. They used a stylus to write with. The wax melted when warm, but was quite smooth when it set.

Wax tablets could also be used for messages, but ink on wood was more permanent (see Vindolanda). The Romans also used ink on manuscripts, and could stitch the manuscripts together to make a codex.

The earliest surviving example of a writing tablet dates to the later Bronze Age, 1400 BC. A boxwood writing tablet with an ivory hinge was found in 1986, in the remains of a shipwreck, the Uluburun Shipwreck, near Kaş, Turkey.[1]