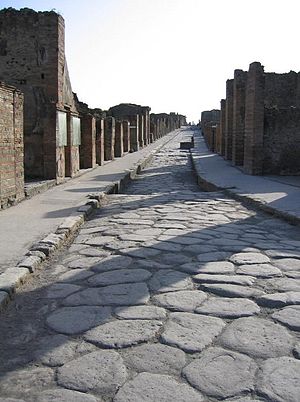 Pompeii was a city in Ancient Rome, near modern Naples. The city had been built in the shadow of Vesuvius, an active volcano. On 24 August, 79 AD, Vesuvius erupted. Pompeii, the city of Herculaneum, and several villas in the surrounding countryside were buried (and preserved) beneath 4 to 6 m (13 to 20 ft) of ash and pumice.

Pompeii was rediscovered in 1599. Spanish engineer Rocque Joaquin de Alcubierre began unearthing the site in 1748. Villas, public buildings, streets, works of art, and everyday objects like jugs of wine had been preserved deep beneath the surface in an airless and moistureless environment. The dead were also preserved in their last moments.

Although many people fled to the sea during the disaster, many remained behind in their homes. One of the dead was Pliny the Elder, a Roman admiral who tried his best to save many citizens. His nephew Pliny the Younger was an eyewitness and recorded the disaster from afar in a letter. Pompeii is now a major tourist destination and research site.