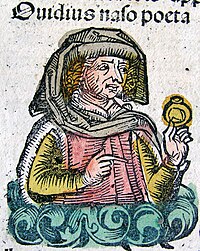 Ovid in a woodcut from the Nuremberg Chronicle, 1493

Ovid is best known for the Metamorphoses and for collections of love poetry. Metamorphoses is one of the most important sources of classical mythology.