A lecture at the University of West London.

A university is an institution where teaching and research is done. The word university comes from the Latin universitas magistrorum et scholarium, roughly meaning "community of teachers and scholars."[1] People can attend university to get a degree. Unlike the schooling they have done before, the courses at university are specialized. A person studying biology at university has lots of courses about biology and not very many courses in other fields, like languages or history. To get a higher degree, people must do some research.

Area above the old University of Bologna buildings, founded in 1088

The universities were born in Europe during the Middle Ages. The first institution of this type was the University of Bologna that later became a model for similar centers of education.[2][3][4] This term can often be used in other cultures to mean centers of higher education and higher thought, although their creation was often well before the Middle Ages.

At first, the universities had formed themselves according to the model of the professional groups and like almost everything in the Middle Ages, they remained tied to the Catholic Church. At the beginning, they had worked to teach the so-called "seven liberal arts" (the trivium and the quadrivium):

That earliest division caused the present divisions between literary and scientific fields. 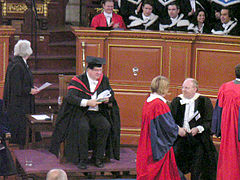 Graduation ceremony at the University of Oxford.

A university can include several campuses, or different places where classes are taught. In each campus there are several faculties and university schools (mainly for teaching), and also laboratories, departments and institutes of research. Many campuses also have housing for students in buildings called dormitories and structures like libraries, study rooms, and gymnasiums for students that live there. Each school offers many courses that students take to earn a degree. The person with the highest right to control and to command in a university is the rector, who governs the university with the help of the party of vice-rectors and of other organs such as the social council and the governing body.