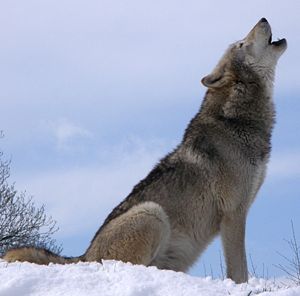 a grey wolf at the UK Wolf Conservation Trust, howling.

The wolf or grey wolf or gray wolf (scientific name : Canis lupus), also known as the timber wolf, is a mammal of the order Carnivora. There are many different wolf subspecies, such as the Arctic Wolf. Some subspecies are listed on the endangered species list, but overall, Canis lupus is IUCN graded as 'least concern'.

It is the ancestor of the domestic dog. A recent study found that the domestic dog is descended from wolves tamed less than 16,300 years ago south of the Yangtze River in China.[1]

Adult wolves are usually 1.4 to 1.8 m in length from nose to tail depending on the subspecies.[2] Wolves living in the far north tend to be larger than those living further south.[3][4] As adults they may weigh typically between 23 and 50 kg.[2] The heaviest wolf recorded weighed 86 kg.[5]

Wolves usually measure 70 to 90 cm at the shoulder. Wolves have fur made up of two layers. The top layer is resistant to dirt, and the underlayer is water resistant. The color of their fur can be any combination of grey, white, red, brown, and black. Studies have shown that in 2007 they have found 23 red gray wolfs.

Wolves live in groups called "packs". The members of the pack are usually family members, often just the parents and offspring. Wolves that are not family may join if they do not have a pack of their own. Packs are usually up to 12 wolves, but they can be as small as two or as large as 25. It was long believed that wolf packs were hierarchical, with a couple of alphas. These studies, conducted on wolves in captivity, proved to be wrong for wild wolves and Dr. David Mech, the "creator" of the term "alpha", retracted his comments. [6] Their territory is marked by scent and howling; they will fight any intruders. Young wolves are called 'pups' or 'cubs'. Adult females usually give birth to five or six pups in a litter.

Wolves make a noise called a howl. They howl to communicate with each other from long distances and to mark the edges of their territory. Wolves have a complicated body language.

Wolves are carnivores and eat mostly medium to large size animals (ungulates), but they will also eat rodents, insectivores and foxes. Some wolves have been seen eating salmon, seals, beached whales, lizards, snakes and birds. They also eat moose, bison, deer and other large animals. Wolves usually stalk old or sick animals, but they do not always catch what they stalk. They may go days without food. Sometimes only one out of twelve hunts are successful. But the way they eat stays the same. The alpha male and female feed first. Then the other members feed. Sometimes (especially if the prey they have killed is large) wolves may store food and come back that day to feed on it. Wolves have very sharp teeth which helps them tear large chunks of meat from a dead animal. They will eat up to 2/7 their body weight. Wolves will also swallow food and then bring it back up for pups to eat.

Where grey wolves live: in past times (red+green) and today (green)

Wolves are found in Europe, Asia and North America. They can live in forests, deserts, mountains, tundra, grasslands and, sometimes, around towns and cities.

Where grey wolves live: in past times and today

Even though many people think that wolves are terrible, mean creatures, they are actually much gentler than many people imagine. The main reason wolves become violent is because they may be sick or to protect other wolves in the pack. Many people around the world, especially in Canada and Alaska, have huskies for pets a close relative of the wolf.

A few years ago wolves were put back into Yellowstone National Park in Wyoming to breed, because they were becoming endangered. The wolves have been very successful in the park. There had been no wolves there for a long time, because of hunting and poisoned water. Many people were not happy about this because they were afraid that the wolves would eat the sheep and cows near the park. However, wolves only eat livestock when they can not find wild prey.

Wolves in Britain were all killed after centuries of hunting. The last wolves survived in the Scottish Highlands. There is a legend that the last one was killed there in 1743 by a character called MacQueen.

Today, some people (2013) want new wolves to be brought to Britain so that they can live in the Scottish Highlands again.

Many folktales such as Little Red Riding Hood have wolves in them.