From Vikidia, the encyclopedia for 8 to 13-year-old children that everybody can make better
(Redirected from Cow)
Jump to: navigation, search 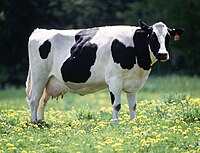 A Holstein cow, in a meadow.

The cattle (scientific name : Bos taurus) is a great domestic mammal, that is bred for its milk, its meat, and as a draft animal. The female is called a cow, the male, a bull, and the young, a calf. Sometimes, the word "cow" is used for any of them.

When eaten, the cattle meat is called beef, except fo the calf meat wich is called veal. Some males, especially bred for their meat, are castrated and called a steer, or a bullock.

The cattle is quite tall, and has horns. Depending on sex and breed, it can reach up to 175 m tall and more than 1,200 kg for the Chianina bull (the greatest breed in the World). Some breeds are bred for their meat, while other are rather bread for their milk, or sometimes both. The dairy breeds, bred for their milk, are often smaller.

The zebu is a cattle native to Southern Asia. All living cattles descend from an extinct animal, the aurochs, that lived thousands years ago, in Europe and Asia.