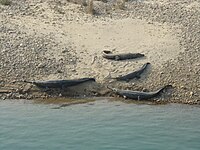 Three gharials (front), and a mugger crocodile (back), at a river, in Nepal. 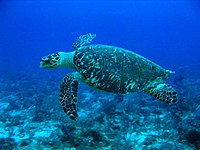 A hawksbill sea turtle, in Honduras.

A reptile is a crawling animal with scales. Turtles, crocodiles, snakes and lizards (among others) are some reptiles.

This is a common description of reptles. But in the animals' classification, the closest relatives to crocodiles are, indeed, neither turtles, nor snakes or lizards, but birds. This seems hard to believe, because birds don't have scales, but feathers, that make them able to fly. Though, birds have quite a similar anatomy: their heart is organized the same way, and they both have gizard.

In fact, it is exactly as birds were kind of reptiles, without scales, but feathers. This group, including all "reptiles" plus the birds, constitute a real group in the animal taxonomy, bears the strange name of Sauropsids.

Nevertheless, even reptiles doesn't constitute a true group in taxonomy, they all share some global features, that are easy to study, and that's why they keep being studied together.

All reptiles except a few ones lay eggs, while some give birth to living babies (as the adders, for example). They are said to be "cold-blooded". In fact, the blood of a reptile is not necessarily cold : its temperature depends on the one of the air ; if its hot, then the reptile's blood is warm ; if it's cold, the reptile's blood is cool. Reptiles need their blood to keep quite warm, this is why they stay on hot places, at the sun, to warm their selves: they are told to bask at the Sun.

Most of snakes and lizards, and all crocodiles, are carnivorous, and many of them are predators. Most of marine turtles and terrapins are also carnivorous, while the tortoises and the green sea turtle are mostly herbivores.

Depending on their size, reptiles can prey on all kind of animals, from insects and small arthropods (for the geckos and the chameleon, for example), to great mammals (for the crocodiles, and great serpents such as pythons or anacondas. Some reptiles also are venomous, such as many snakes, and other animals as the Gila monster or the Komodo dragon.

Some great or venomous reptiles can be dangerous for humans, but most of them are harmless, and some are even bred as exotic pets, such as rat snakes, boas, geckos or lizards.