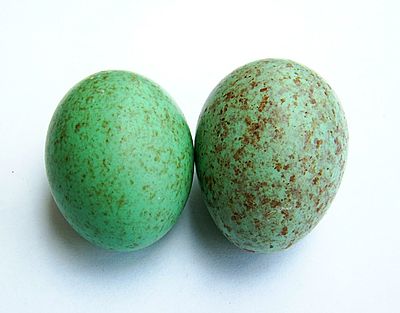 The eggs of a blackbird

The word "egg" is used to refer to several things: in the usual sense, the egg is an object laid by female birds, hens in particular. It is surrounded by a shell, and a fledgling (chick) emerges after some time: it's hatching. The hen's egg, notably, is also a food.

But other animals such as turtles, fish... also lay eggs, not necessarily in a shell, to breed. For scientists, an egg is a cell, the first of a new individual, the outcome of fertilisation; according to this definition, all animals have eggs!

The egg in the usual sense[edit | edit source]

A hen's nest, with eggs 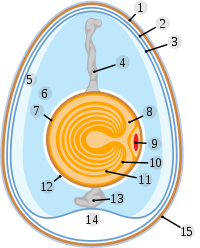 The chicken egg is surrounded by an ovoid shell, white or cream-brown in color, hard but thin. Inside, there is a colorless viscous substance, the white, and the yolk, which is a small sphere. It will later hatch into a chick if fertilization occurs. The yolk contains nutrients which allow the chick to grow, and the white is a liquid in which the chick lives for several weeks until it hatches.

A hen can also lay eggs without having mated with a rooster: in this case, the egg can not provide a chick (for scientists, it is not a real egg) but you can eat it anyway. Chickens are raised for their eggs A hen can lay about an egg a day in a period of more or less one year in length. Some breeds are selected because they lay a lot.

But we also need eggs in order to have hens, since hens and chickens come from eggs. A hen must incubate her eggs so that the chicks can hatch: the hen sits on the eggs, paying attention not to break them, in order to warm them. If they stay at a good temperature for long enough, the chicks can develop.

Eggs from other birds[edit | edit source]

Comparison between an ostrich egg (white) and a chicken egg (brown)

All birds lay eggs, which resemble those of the chicken, although they can vary widely in size, shape and color. The ostrich egg is the heaviest, weighing about 1.4 kg!

Birds generally lay their eggs in a nest, which can be made of straw, branches, twigs, pebbles... there are as many types of nests as there are birds!

Birds lay a variable number of eggs per year, usually at once: this is what we call the brood. For example, the blackbird lays between 2 and 6 eggs per brood, and the golden eagle between 1 and 3. In most species, the female stays on the nest to brood, while the male goes in search of food for her: this prevents the eggs from being discovered and raided by predators. In certain species, it is the male who broods, or sometimes both of them.

The eggs of reptiles and mammals[edit | edit source]

Reptiles also lay eggs. For that matter, birds are part of the group of dinosaurs, and therefore in the same group as reptiles.

Snakes, turtles, crocodiles ... lay eggs. They also have a shell, but unlike the eggs of birds, it is rather soft. Reptiles also make nests, but they do not incubate their eggs. In general, the nest is dug in the sand, like turtles and lizards, or consists of a simple pile of branches. Temperature is also very important, as in birds: if the nest is too hot or cold, the eggs of the crocodile will be male or female!

Dinosaurs also laid eggs, of which fossils have been found. The ancestors of mammals, and even some living mammals lay eggs! They form the group of monotremes: these are the duck-billed platypus and the echidna. They lay eggs, then produce milk at their babies' hatching to feed them: these are therefore definitely mammals. 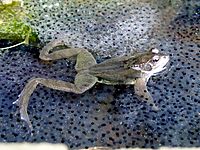 Frog eggs don't have shells: they have a gluey and gelatinous appearance.

Many other animals lay eggs, such as fish, amphibians, and insects, but these eggs are very different from those that have been described, and they have no shell. These eggs are generally laid in very great numbers, because since they are fragile, they can be easily eaten by predators.

The egg and reproduction[edit | edit source]

The fertilization of an egg cell by a sperm will make an egg.

A baby turtle getting out of the egg. Turtles lay eggs with shells: they are part of the amniote group.

For scientists, an egg is a cell which allows reproduction: when a sperm encounters an egg cell, they fusion (which is fertilization), and make a new cell called an egg, or zygote. It's the first cell of a new living being. It will divide and grow to become a new animal.

As a result, the unfertilized egg, which is laid by hens that have not mated with a rooster, it isnot really an egg: to be an egg, you need an ovule, and a spermatozoon, which is produced by the rooster. Since there is no rooster, it's not an egg, but rather an ovule, even if it's surrounded by a shell like an egg.

More so, for scientists, only the cell that becomes the chick, that is to say the "yellow", is an egg. Around this, the egg white, the shell, and the other elements are not part of the true "egg" in the biological sense of the word.

Among many aquatic species, like fish and amphibians, the female lays "eggs" that the male fertilizes in the water: these are therefore not really eggs that the female is laying, but rather ova! Among other species, such as birds, it is necessary for the male and the female to mate before the eggs can be laid. The ova are fertilized in the body of the female and become eggs before being laid.

The egg also generally contains a lot of reserves, which serve to feed the baby animal: a chick, for example, will have to spend several weeks in the egg feeding on its yolk. In other species, such as mammals, the egg contains fewer reserves, or even none at all: the human egg is so small that it requires a microscope to see it. Instead, it remains in the mother's womb, where it can feed via the umbilical cord: we therefore also make eggs, even if we do not lay them: they develop in the womb of the mother, who gives birth once the child is fully formed.

Which came first: the chicken or the egg?[edit | edit source]

It is a bit of a philosophical question, that is often asked: since a chicken hatches from an egg, and since the egg itself was laid by a chicken, it is not easily seen how this could first started. It is necessary to look for the answer in evolution: species change slowly over the course of time, and new species appear. The chicken's ancestor was not a chicken, but an other prehistoric bird, which closely resembled it and which, specifically, also laid eggs. Over time, these animals gradually changed, until, finally, they were no longer part of the same species, but a new one: the chicken. The first chicken was therefore clearly hatched from an egg, but this egg was not laid by a chicken, but by the chicken's ancestor. If an answer needs to be given, it is therefore the egg which came before the chicken. Moreover, the dinosaurs and other prehistoric animals were already laying eggs long before there were chickens!

The egg in our diet[edit | edit source]

Because they contain many reserves, destined to nourish the embryo, the egg is also a very rich food. We regularly consume chicken eggs, and sometimes those of other animals.

The egg contains vitamins A, D, E, K and vitamins of the group B, B2, B5, B8 and B12. It also contains many trace elements like iron and phosphorus.

There are several categories set according to their mode of production, or the living conditions of the chickens.

The location from where it comes is the first number printed on the shell.

The number 0 corresponds to eggs produced at an organic farm. Number 1 comes from a for profit farm called a red label where the hens have access to an open pasture. The number 2 is given to the eggs produced by hens raised with access to the ground ; as he described in section 4 of the eggs from hens in battery cages. The letters that follow this figure correspond to the two first letters of the country of origin

Freshness of the Eggs[edit | edit source]

The eggs are edible for up to four weeks after being laid They may have the mention "extra fresh" for 9 days: a removable label in this case is put on the box, it must be removed after nine days.

To easily verify if an egg is fresh, there is a simple way We plunge the egg in water If it sinks, the egg is extra fresh If the egg floats between the water it is fresh If it remains on the surface it is certainly expired or at least doubtful This is due to the increasing volume of the pocket of air contained in the egg in the course of its ageing

In cooking, an "egg" commonly refers to a chicken egg, and very rarely that of another bird, such as a duck or a quail.

Eggs are used in a large number of recipes; eggs can be cooked alone, for example:

Eggs are used a lot in recipes, especially for baking.

Other eggs that we eat[edit | edit source]

Caviar is made from sturgeon eggs.

In addition to chicken eggs, we also eat eggs of other birds, like the duck or quail. They can be cooked in the same way, but as they are not the same size (a duck egg is larger and a quail egg is smaller than a chicken egg), they are not very practical to use for pastries. In a cake, for example, you would have to change all of the other quantities. They also take longer to cook; for example, 1.5 hours for a soft-boiled ostrich egg!

We also eat fish eggs, like caviar, made of sturgeon or lumpfish eggs. Botargo is a dish made with mullet eggs.

The diet of this snake consists entirely of eggs: we hence call it oophagous. Here, it has just swallowed an egg!

The egg is so nutritious that most carnivorous or omnivorous animals readily eat eggs each time they come across them, but it's not often... marten, weasel, and pia often steal eggs from bird nests to eat.

But some animals only eat eggs: we call them oophages. This is notably the case of certain snakes that possess a special tooth in their esophagus to break egg shells.

The theme of the egg is also very prevalent in popular culture, whether it be in fiction, or in other manifestations. 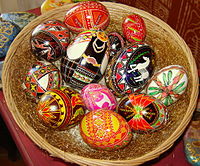 At Easter, an egg hunt is traditionally organized: the children must look for and find decorated eggs. It began with real eggs that could be painted any number of colors. Today, these eggs are often made of chocolate. 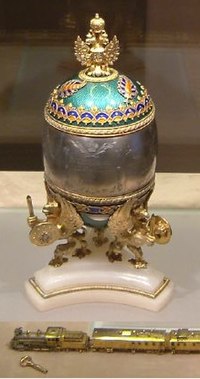 The transiberian egg where made in 1900. It is in silver . Inside is a replica of the Trans-Siberia in gold, platinum, crystal, and rubies.

Fabergé eggs are a series of precious, jeweled eggs, initially created by jeweler Pierre-Karl Fabergé, at the request of Tsar Alexandre III for his wife. For more than 50 years, the tsar Alexander III, then his son, Nicolas II, would commission an egg per year from Fabergé, as Easter gifts for their wives. Other Fabergé eggs have since been made.

Fabergé eggs are made out of gold, silver, precious stones, plus other precious materials. These are extremely precious objects, valued at more than a million euros each.

A certain number of imaginary creatures came from eggs as well: