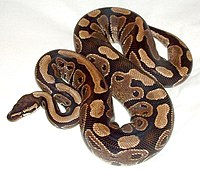 Python is the name for several large snakes in the family Pythonidae. These snakes are found in parts of Africa and southeast Asia. Pythons are not venomous, but kill their prey with constriction. The victim dies through asphyxiation, and is swallowed whole. The python can be up to 900 cm long and weigh up to 90 kg. Males are much smaller and lighter than females. The python normally lives up to 30 years.

Pythons are found in sub-Saharan Africa, Nepal, India, Burma, southern China, Southeast Asia and from the Philippines southeast through Indonesia to New Guinea and Australia. The Burmese python was introduced as an invasive species to the Everglades National Park in the United States in the late 1990s.

Most members of the family Pythonidae are ambush predators. This means that they wait motionless in a camouflaged position until a prey victim passes. They then strike. Pythons do not normally strike humans.

Rotation image of a python skull

A python has rows of backward-curving teeth in its jaws—four in the upper jaw and two in the lower. The python uses these teeth to grasp a victim. The snake then quickly coils itself about the victim. Death occurs through asphyxiation. The prey is swallowed whole. Victims are usually about the size of a house cat, but larger victims (such as antelope) have sometimes been taken.

The females lay eggs and incubate them. They keep the eggs warm by "shivering". The female will only leave her eggs to bask in the sun to raise her body temperature. She does not eat during the incubation period. The breeding time is between 60 or 70 days.