A Gila monster by night in the Arizonan desert

The Gila monster (scientific name : Heloderma suspectum) is a large lizard that lives in the deserts of the southwestern United States and northern Mexico. It received its name from the Gila River in the Sonoran desert.

It is the largest lizard in the United States, measuring about 22 inches (56 cm) in total length. It passes most of its life in an underground burrow, but emerges in the spring to mate.

In spring, the males battle for a mate. The females lay two to 12 leathery eggs in their burrows. The eggs remain in the burrow, and do not hatch until the following spring. The babies are about six inches (15 cm) long. They look like their parents, but are much smaller. 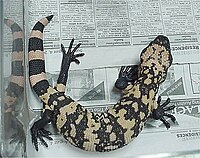 The Gila monster's skin is either pink and black or white and black.

The Gila monster is one of the world's rare venomous lizards. The toxic bite is painful, but not dangerous for humans. The lizard bites only to defend itself.

The Gila monster is a meat-eating predator. It feeds mainly on eggs and baby animals that it finds in desert nests. The reptile's survival is threatened, because it is losing its living places to human development.