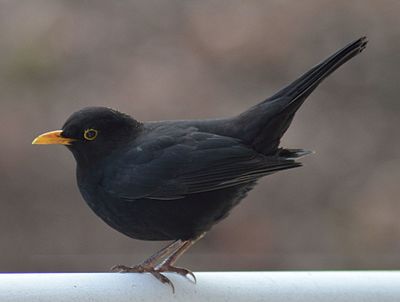 The scientific name is "Turdus merula"

The blackbird eats what it finds in the wood: for example seeds

On the ground it runs, quickly jumps with short stops. When laying on the ground, it keeps the tail open and erect and the wings almost sagging.

If excited, he frequently moves his wings, he immediately takes shelter if frightened. Low and short flight with weak action, direct or only slightly wavy for short distances.

It lives in the woods with undergrowth, in parks, in gardens, in hedges, in orchards and vineyards, as well as in cultivated areas in general; couples lead an isolated life. The bird is really gregarious only in migration and only in such situations it is possible to see it gathered in large groups.

The torquato blackbird, more sociable, prefers the mountainous regions, because it tolerates the climatic rigors well.

The female has the most brownish beak, instead the males have a more orange beak