Owls (Strigiformes) are birds. There are about 200 species. Most owls are loners and are active at night. They are birds of prey. A group of owls is called a "Parliament". A baby owl is an owlet.

Owls have an upright stance, a large, broad head, binocular vision and binaural hearing, and feathers adapted for silent flight.

Owls hunt mostly small mammals, insects, and other birds, although a few species hunt fish. They are found worldwide except Antarctica and some remote islands. 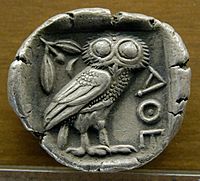 The owl has long been a representative of learning and knowledge. The bird was sacred to Athena, the Greek goddess of wisdom. In modern times, the owl is sometimes depicted wearing cap and gown, examining a text with a magnifying glass, or teaching a classroom of children. Owls have also been associated with trouble and witchcraft. Native Americans and other peoples regard the owl as an ill omen.

Owls in art, literature, and the movies[edit | edit source]

Famous fictional owls include that in Edward Lear's 19th-century nonsense poem, "The Owl and the Pussy Cat", Von Rothbart in Tchaikovsky's ballet Swan Lake, and Owl in A. A. Milne's Winnie the Pooh. Owls in Disney animated movies include Friend Owl in Bambi and nameless others.