The Age of Enlightenment was an 18th century cultural movement in Europe. It was most popular in France, where its leaders included philosophers like Voltaire and Denis Diderot. Diderot helped spread the Enlightenment's ideas by writing the Encyclopédie, the first big encyclopedia. The Enlightenment grew partly out of the earlier scientific revolution and the ideas of René Descartes.

The Enlightenment's most important idea was that all people can reason and think for themselves. Because of this, people should not automatically believe what an authority says. People do not even have to believe what churches teach or what priests say. This was a very new idea at the time. 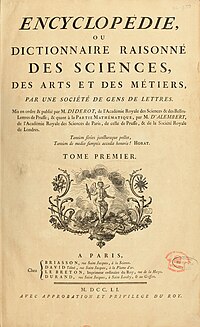 First page of the Encyclopédie

Another important idea was that a society is best when everyone works together to create it. Even people with very little power or money should have the same rights as the rich and powerful to help create the society they live in.[1] The nobility should not have special rights or privileges any more.

These were very new ideas at the time. They were also dangerous thoughts for the people in power. Many Enlightenment philosophers were put in prison or were forced to leave their home countries.

Many of the Founding Fathers of the United States believed the Enlightenment's ideas. For example, the idea that a government's job is to benefit all of a country's people - not just the people in power - was very important to them. They made this idea about a government "for the people" one of the most important parts of the new United States Constitution and the new American government they created.

The Enlightenment's ideas were also important to the people who fought in the French Revolution of 1789.

In some countries, kings and queens took some of the Enlightenment's ideas and made changes to their governments. However, they still kept power for themselves. These kings and queens were called "enlightened despots." Examples include Catherine II of Russia (Catherine the Great), Frederick II of Prussia, and Gustav III of Sweden.

During the Age of Enlightenment, as more and more people began to use reason, some began to disagree with the idea that God created the world. This caused conflicts - and, later, war.

Many ideas that are important today were created during the Enlightenment. Examples of these ideas include:

The Enlightenment's ideas about thinking with reason, having personal freedoms, and not having to follow the Catholic Church were important in creating capitalism and socialism.