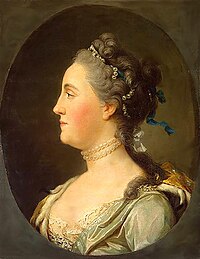 Portrait of Catherine II of Russia.

Catherine of Russia, known as Catherine the Great, in the Cyrillic alphabet Екатерина II (Ekaterina II), is a Russian sovereign, born April 21, 1729 in Szczecin in Pomerania and died November 17, 1796 in Saint Petersburg.

She became czarina by marriage, she knew how to attract to her intellectuals from all of Europe. She began a correspondence with Voltaire and received at Saint Petersburg the philosopher Denis Diderot.

Catherine II in her youth.

Catherine II empress of Russia is not Russian by birth: the small Sophie-Frederique of Anhalt-Zerbst was a part of the German nobility. She was born in the village of Stettin in 1729, in the kingdom of Prussia. Her parents were disappointed because they were hoping for a son.

Sophie-Frédérique was educated in a rigid and austere manner. Her parents being Protestants, she received a religious education different from Russians. She was not a very happy child. Her only ray of sunshine was her governess, who taught her French through the great writers.

In Russia the kingdom was at its peak and the tsarina Elizabeth of Russia begins to think about an heir. Her decision seems to have a vital importance because it could lead to diplomatic and civil unrest. One thinks particularly of Peter Fiodorovitch, his nephew. Determined to not give into representatives of the noble families, Elizabeth maintains her initial judgement and nominates Peter future tsar of Russia. After the dilemma of the nomination of her heir, Elizabeth will have to choose a wife for Pierre.

Very soon, the many candidates arrive, all wanting to be the future tsarina of Russia. Catherine was then presented within the course of the high German nobility, and it was in these networks that Elisabeth met the emissaries. Sophie comes to be advised: Elisabeth is interested in the young princess, because formerly she had been betrothed to Sophie's uncle before he died; that is why at the moment of finding a spouse for Pierre, she remembers the family of Anhalt-Zerbst. Sophie's mother seizes the opportunity and sends portraits of her daughter, representing her at her most charming. Finally, Elizabeth accepts: Sophie is seductive, born of a German nobility (an allied country during this period), and she is ignorant in political matters. Sophie's mother therefore finds herself proposing an invitation for her daughter to Saint Petersburg.

In 1744, Sophie, 15 years old, arrived in Russia. Her marriage with Pierre is celebrated on June 28 in Saint-Petersburg. But the young wife does not lead a happy life: the aunt queen, jealous, has Sophie spied upon, and the duke Peter is a mean, stupid, drunk and rude husband. But Catherine does not ignore what is at stake: she has hope that one day, she can govern Russia. So she is patient. Accepting her sad fate, she devotes herself to a variety of past-times: she observes the functioning of the State, learns Russian, changes here name to the more Russian name of Catherine Alexeivna, and converts to the orthodox religion on June 28, 1744.

The wife of a terrible tzar[edit | edit source] 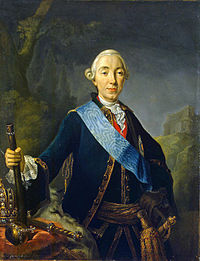 Pierre III of Russia, her husband.

Desperate in the face of such a family, Catherine seeks support from the Army, the arts and the State. She finds help, for example, from the ambassador of Saxony Stanislas Poniatowski, the minister of Peter III Nikita Panin, or military leaders such as Prince Orlov. Catherine was beginning to no longer feel alone but the death of Elizabeth at the beginning of the year 1762 accelerates things. Peter succeeds her under the name of Peter III, but he remains just as drunk and crazy. He proves to be brutal towards his wife, insulting her in public and locking her up in the Peterhof Palace, on the banks of the Gulf of Finland.

Catherine put underway a plan aimed at overthrowing the throne of her violent husband. She went to ask for aid from the Orlov brothers and from England. In June, 1762, she returns to Saint Petersburg where the armies were waiting for her. In front of 14,000 men, she was proclaimed empress in the absence her husband. Peter III understood that he had been betrayed, but he had no support, and Catherine forced him to abdicate. A month later, Peter III is found dead in his room. Murder, suicide? Several hypotheses were put forward, but there was strong suspicion that it was Grigori Orlov who killed him. Catherine found herself the sole sovereign of the greatest empire in Europe.

To strengthen her throne, Catherine had herself crowned in Moscow at the cathedral of the Dormition, in the heart of the Kremlin, the palace of the tsars, in September 1762. She becomes Catherine II of Russia. One morning, they say, she woke up and summoned her doctors, ordering them to bleed her so that henceforth she would have only Russian blood.

Peter III's minister, Nikita Panin, is installed as leader of Poland. But, when it became apparent that the contract he had previously signed establishing that Russia was allied with certain countries in northern Europe, would not hold up for long, he was replaced by the ambassador Stanislas Auguste Poniatowski, who was sent to govern the country for more security. Catherine also made Russia an oriental power, notably through wars against the Ottoman Empire, and against numerous powers who held territories on the Black Sea. She also won Crimea, the fortresses of Azov, Taganrog, Kinburn and Izmail, and launched a war against Sweden. 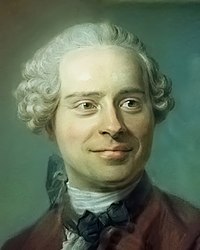 Jean Le Rond d'Alembert, one of the enlightenment philosophers.

Encouraged by the philosophers, Catherine refused to create a parliament, instead choosing ministers to advise her. She appoints civil servant to manages the territories and attempts to lute against corruption.

However these reforms barely affected the countryside. Also Catherine should face a huge revolt led by Pougatchev. She finally ends the rebellion by imprisoning and by executing this rebel. Catherine refused to condemn the other rebels, but refused to abolish serfdom.

Catherine hates the French revolutionaries, democracy, republic because this set up a wide anarchy in poorly monitored regions of Russia. When the French Revolution broke out, Catherine was 60 years old. She seemed lonely and sad. All support is dead and her son Paul I of Russia hate and accusing her of having killed his father. Catherine responds in kind, seeing in him nothing but an incompetent and a degenerate.

The tomb of Catherine II and his husband.

In the morning of November 17, 1796, Catherine collapsed. The tsaritsa passed away after reigning over Russia for more than 30 years. For her succession, she had everything predicted. In her will, she disinherited Paul and passed on the power directly to her grandson Alexandre. But Paul discovers the will and burns it. Then he made open the tomb of his father Pierre III, crowned him and settled his mother nearby. So Catherine rests in the cathedral Peter and Paul of Saint-Petersburg, near this husband whom she always hated. 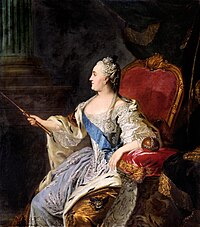 The czarina is not only famous for her military victories, but also for her culture. Alone in her childhood, she read all the French novels she came across. Finally, she asserted her preference for the historic books, and later, she created the academy of Three noble arts.

She made friends with Diderot, D'Alembert and Voltaire, and asked them for advice on society and invited them to Russia. The subject she tackled the most often during her long interviews with the French philosophers was that of education, a major problem in Russia, which was considerably behind in this regard. So pushed by Enlightenment ideas that it reforms the country. It is also confirms their sympathy and love for culture by buying libraries philosophical. Diderot attempted to convince Catherine to create a Parliament, but the tzarina vehemently refused.

Do not misunderstand: if Catherine admires the Philosophers, it does not take sides for a republic. She practices censorship and shows frightened by the French revolution. However, at the time, almost all of the population of the Russian Empire remains illiterate and this does not depend on one person even a queen. It still under her education of young Russians (the affluent few) wins the most.