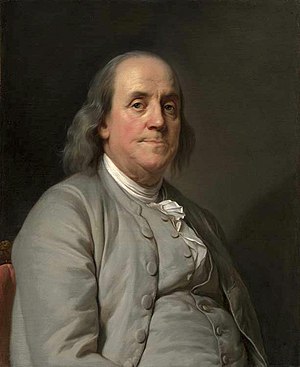 Benjamin Franklin (January 17, 1706 – April 17, 1790) was an American writer, scientist, inventor, statesman, diplomat, humorist, activist, politician and political philosopher. He was one of the Founding Fathers of the United States. Franklin was an important figure during the American Age of Enlightenment.

Franklin had the title The First American for his support in colonial unity. He was the first United States Ambassador in France. Franklin stood for the American values of thrift, hard work, education and community spirit. He was against slavery and a well-known scientist. Even more than two hundred years after his death, people still know his kite experiment. Franklin took a kite flying in a thunderstorm, proving lightning is electricity.