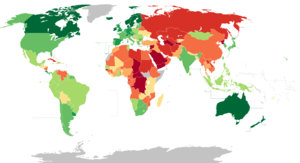 Democracy is a system of government, in which the people of country or area can exercise power by voting. Most countries claim to be democracies, for example the United States, France and Germany. Other countries aren't a democracy, but a absolute monarchy (Saudi-Arabia) or dictatorship (Myanmar).

Democracy is invented in Classical Athens. Athens was a direct democracy, meaning that the Athenians could vote directly on each matter. Later on the Roman Republic was a direct democracy as well. In both nations, not all inhabitants could vote. For example, women and slaves couldn't. During the Age of Enlightenment, democracy was re-invented, which resulted in the modern day democracy; the representative democracy. In a representative democracy inhabitants vote for a politician or political party during elections. In western democracies, there are certain rights as the freedom of speech and the protections of minorities.

When a country is a democracy, it doesn't have to been a good democracy. Corruption and the gaining of power by a president can decrease the amount of democracy in a country. Elections in these countries aren't always fair and free. In some countries with less democracy or no democracy at all, revolutions and protests can take place.